We all love ball being hammered around the park for fours and sixes. I mean, who doesn’t? The thrill of watching the ball go the distance on almost every delivery. With disappointment following every time a dot ball is bowled. The fastest centuries are amazing to witness as you are probably rooting for the batsmen to overhaul the previous record and live to witness the tale for the rest of your lives. At least, cricket fans think that way except, the times when the brutal onslaught is against their team.

Well, it’s a shame that not one Indian batsman could make it into the list. Honestly, there was none within miles of top five fastest centuries in ODIs. Moving on, let’s relive these moments once again. But don’t blink too much, you might miss a few shots (the fastest centuries are in ascending order of five)- 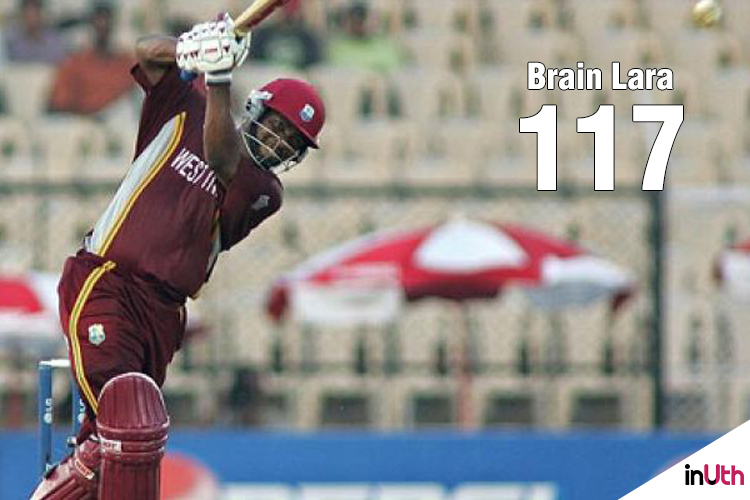 5. When Brian Lara played the T20 way, way before it’s time
Brian Lara was always categorised as a pure class player, his timing was exquisite and far better than anyone in the team in his era. He is the flavour West Indies have been missing these days. Though, he might have given inspiration to most Caribbean players that they play such good T20 innings these days and Defending Champions.

October 9, 1999. West Indies were touring Bangladesh for a bilateral ODI series. He was leading the side, won the toss and elected to bat first, a decision he will cherish for life. He came into bat alongside Sherwin Campbell. Lara was always the one who tried to pierce the boundary and early on and then went for an onslaught once he was set. But, this time around it felt as if he was set even before putting his equipment on.

A fact to be noticed is that he is the only player who has scored more fours than sixes in the top five fastest 100s in ODIs. He thrashed Bangladesh opening bowlers Manjural Islam and Shafiuddin Ahmed to an extent that they did not come to bowl after their first spell in the powerplay overs. The non-striker barely scored any runs when Lara was on the other end.

Lara reached his 100 in 45 balls and became then-second-fastest batsman to reach and ODI century. His innings included 18 fours and 4 sixes which helped his team score 314 runs in 50 overs. West Indies won the game by 109 runs but we wish T20 was introduced earlier in the 90s because a player like Lara would have rocked it. 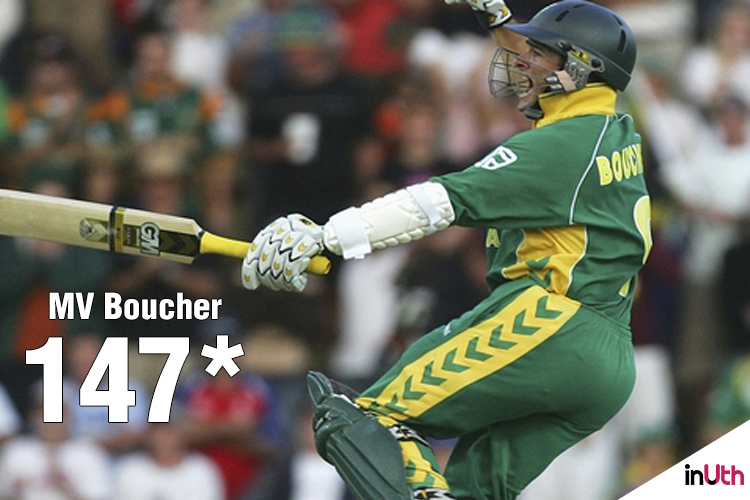 Mark Boucher made full use of a lowly Zimbabwean bowling lineup

4. Mark Boucher teaches the minnows a lesson
Boucher has always been a batsman who has batted at the toughest position. He has taken the team home at several times, the most thrilling being the 438-run chase against Australia which went down the history books as the biggest chase in the ODI history.

Moving ahead, this match in 2006 was not in the news, for one obvious reason that they were playing against minnows Zimbabwe. A few players were rested for this ODI series and Jacques Kallis was leading the side. The Proteas were off to a good start with openers Loots Bossman and Alviro Petersen scoring 88 and 80 runs respectively scoring more than run-a-ball. Boucher came in when the scoreline read 199 for 2 in 30th over.

Clearly, South Africa were in for a big target but again Boucher always has other intentions. He grabbed the rare opportunity of coming at No.5. He took his time to reach the half-century and settle himself in but the journey between 50 to 100 is bit of a blur. Before moving any further I should tell you that Boucher has scored half-centuries in 19, 20 and 22 balls.

Soon enough Boucher knew no boundaries as he muscled the ball for a six, stepped down the wicket and what not. Zimbabwean bowlers had no clue and before they knew he had reached his century in 44 balls becoming the then-second-fastest batsman to score an ODI century.

His hunger for runs did not just stop at reaching the hundred as he went on to blast 147 runs from 68 balls including 8 fours and 10 sixes and that too unbeaten till the very end. Boucher by then had taken his team to a gigantic first innings total of 418 runs. As expected Zimbabwe had no answer to this score and lost the ODI by 171 runs. 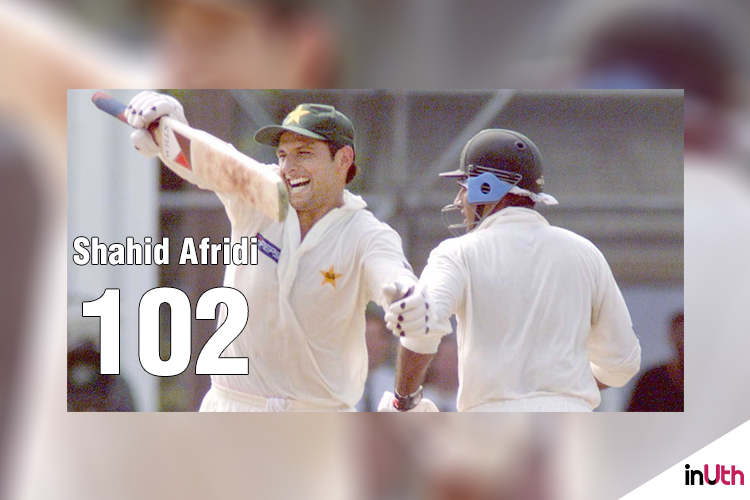 3. When Shahid Afridi thrashed Sanath Jayasuriya’s record by a mile
Afridi gained his infamous nickname of ‘boom boom’ because of one reason only, that he spared and feared none in his early days. A fearless batsman is one who plays his natural game and Afridi’s game was a hell lot of attacking. His fastest ton dates back to 1996 against Sri Lanka in KCA Centenary Tournament.

1996 was more than two decades ago and that time there were no switch-hits, scoop shots, reverse scoop shots, uppercuts etcetera which made life easy for the batsman. One has to resort to timing and strength for power-hitting and that’s what Afridi was all about in his early days. He came into bat and joined opener Saeed Anwar in the middle as Sri Lankans had no idea what was going to hit them.

Afridi came and he conquered blasting sixes and fours at ease, soon enough he eclipsed Anwar who seemed to have shifted down a gear or two. He fell short one ball shy of equalling Sanath Jayasuriya’s then-record of fastest fifty off 17 balls. But, Afridi had the last laugh as he eclipsed Jayasuriya’s then-record of fastest 100 from 48 balls by a mile as he scored his from just 37 balls featuring 6 fours and 11 skyscrapers-crashing sixes that were a treat to watch for the crowd. Soon enough he became a sensation.

His innings along with Anwar’s century took Pakistan to 371  which was more than enough for Sri Lanka as they lost the ODI by 82 runs. He also broke the then-record of Jayasuriya which was only a few months old. Though, it was a shame that he could not continues his innings as he got out for a score of 102 midway through the innings. 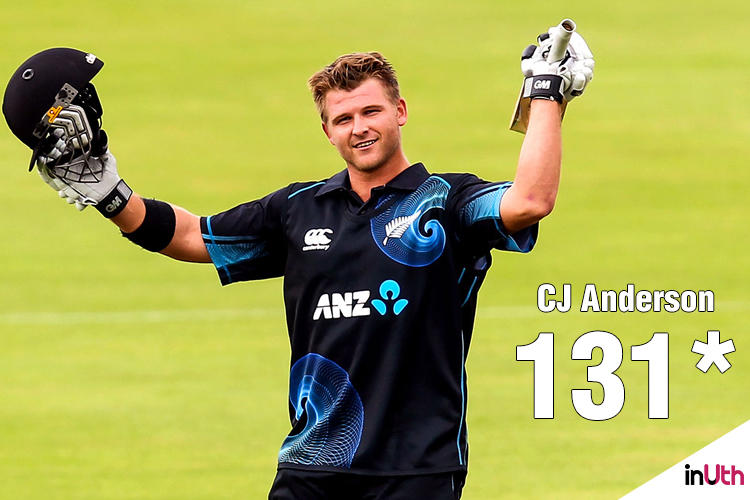 Corey Anderson broke a record which was considered to be unbreakable

2. When Corey Anderson broke the 18-year-old record
Till this point, a whole lot of players came close to breaking Shahid Afridi’s 18-year-old record but never succeeded in doing so as they fell short of the record by a margin of 10-12 balls losing pace midway. But, Corey Anderson was a different beast, he had made his debut recently only and was rearing to prove himself in the international scene, none expected it will come that soon.

Anderson came in when New Zealand started to struggle after getting off to a flier, the score was 3 for 84 in 8th over when Taylor went back to the pavilion. Anderson joined Jesse Ryder who himself was blasting fours and sixes. Anderson made a mediocre ODI into a remarkable one as he surprised everyone with his wide array of shots. He got to his 100 from 36 balls stunning cricket fans around the world.

In that ODI Ryder too scored the 6th fastest century in ODIs at that time from 46 balls. Anderson did not just get satisfied by scoring a ton but the powerful left-hander went on to score 131 runs from 47 balls including 6 fours and 14 sixes taking the score to a mind blowing 283 runs in a rain-curtailed 21 overs per side match against a helpless West Indies side. The Kiwis eventually won the game by a margin of 159 runs. 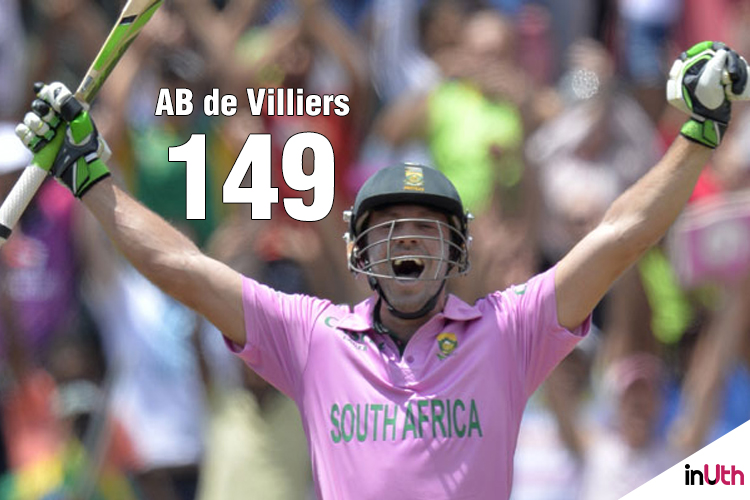 1. AB de Villiers’s pink shirt heroics
Pink turned out to be a lucky colour for Mr 360. He walked in the 39th over with set up platform setup for him by South African openers. The Proteas were 247 for 1 and De Villiers came ahead of Du Plessis in order to score runs at a brisk rate. To be honest, everyone waited for De Villiers for a special inning but not as legendary as this one.

It will be an apt description to suffice that De Villiers left no part of the field untouched by his fours and sixes. He did not spare any bowler blasting maximums in the most unexpected places of the ground. Jason Holder was the one who was targeted the most as De Villiers scored 45 runs off 9 balls off him.

P.S. We all hope that one day an Indian batsman breaks this record or at least makes it into the top five so we can reshuffle this list. Are you listening Virat Kohli?