Indian cricket team captain Virat Kohli, who is the second-most followed public figure in the country after Prime Minister Narendra Modi and the most followed sportsperson on Facebook ahead of MS Dhoni and ‘Little Master’ Sachin Tendulkar, uses an MRF sponsored bat which is worth more than Rs 12 crore. Virat Kohli since his debut against Sri Lanka in 2008 has so far played 292 matches including 57 Tests, 187 ODIs and 48 T20Is.

Virat Kohli, who has scored more than 14,000 runs across all formats of the game, is paid over Rs 12 crore a year for sticking an MRF logo on the willow. According to an Economics Times report, Indian skipper Virat Kohli has reportedly signed an eight-year Rs 100 crore deal to have MRF sticker on his bat; which translates to more than Rs 12 crore a year. His previous three-year deal with MRF was for Rs 8 crore. This is the biggest ever deal in the cricket bat sponsorship space.

“We have renewed the bat sponsorship deal with MRF for eight years. MRF was keen on securing Kohli for a long term,” the Economics Times quoted Bunty Sajdeh, CEO of Cornerstone Sport and Entertainment, the agency that manages Kohli’s endorsements, as saying.

Going by the amount, the common man can buy 300 leading Maruti 800 Alto cars which will be equivalent to the price the Indian skipper is currently fetching for using a bat.

The India’s captain is arguably the biggest ever brand, a feat which was earlier achieved by Sachin Tendulkar before his retirement from the International cricket. 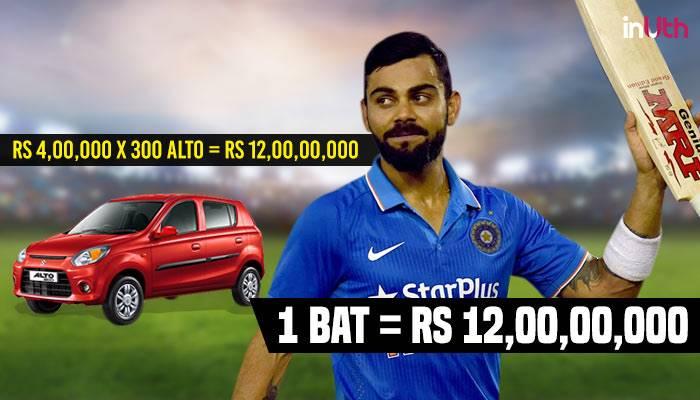 Meanwhile, Virat Kohli with 35,812,881 fans became the most followed sportsperson on social media site Facebook, way ahead of Sachin Tendulkar who has 28,557,109 followers.