If you were a 90’s kid and you are crazy for cricket and our Indian cricket team, then you must have witnessed Indian team’s evolution from a being an ordinary team to number 1 in the ICC team’s rankings. From the late 90s till now, Team India witnessed four captains i.e. Sourav Ganguly, Rahul Dravid, Mahendra Sigh Dhoni and at present Virat Kohli. Many fans feel that it was Sourav Ganguly who provided a new hope for India after the team was hit by ‘match-fixing scandal’ due to which some of the prominent players were forced to quit. On the other hand, there are a large number of fans who think it was MS Dhoni who did the turnaround and helped team India in lifting the World Cup after a 28-year wait. Some even say that current skipper Virat Kohli is the best leader, team India have ever witnessed. For Rahul Dravid, there is not much support because he led the team in the shorter span of time.

This is a never ending debate. Sourav Ganguly, MS Dhoni and Virat Kohli are masters in their approach to the game of cricket. While Ganguly was known for his aggression, Dhoni will always be remembered for his surprising decisions. In order to understand who is the better among the three legends let’s have a look at their records, statistics and facts.

It is a well-known fact that under Sourav Ganguly team India flourished and achieved new heights. The aggression and zest for a win what the prince of Kolkata brought into the players. Moreover, Sourav Ganguly is responsible for many prominent players success like Yuvraj Singh, MS Dhoni and Suresh Raina among others. Ganguly during his captaincy gave them the chance to flourish and helped them emerge as an excellent cricketer. He supported them during their struggling period and today we all know where these players stand. In fact, he had played a major role in the grooming of the youngsters. 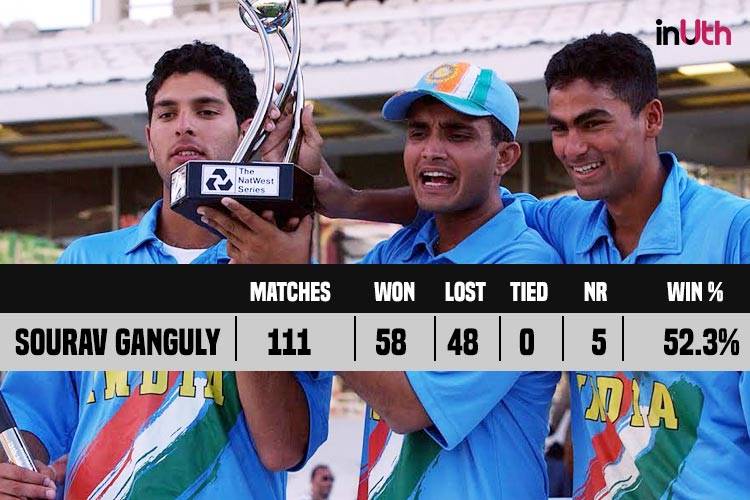 “…Sourav Ganguly was excellent at a time when faith in Indian cricket was diminishing and he was what we call a wartime general,” Harsha Bhogle, Cricket commentator

His act of taking off his shirt in the final of the 2002 NatWest Series against England is the proof about how much he was passionate about his game and his aim of playing a game of cricket is to win.

Interesting Fact: Sourav Gangly is the most successful Indian Test captain overseas with 11 wins. The Indian team was ranked eighth in the ICC rankings before he became the captain, and under his tenure, the team’s rank went up to second. Great Indeed!!!

Mahendra Singh Dhoni, who grabbed the limelight as big hitter of the ball, was named the captain of Indian squad for the inaugural ICC World Twenty20 held in South Africa in September 2007.  Men In Blue were crowned champions of the tournament as Dhoni led the team to historic victory against Pakistan in a thrilling contest. He then took over the ODI captaincy from Rahul Dravid in 2007 and Test captaincy in 2008. 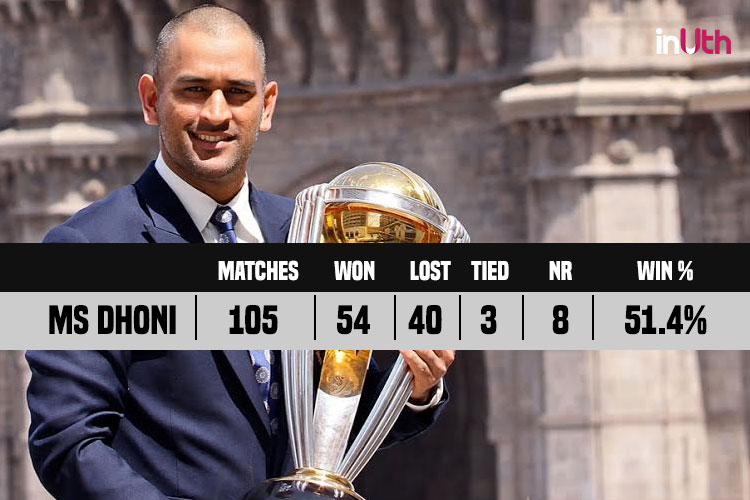 MS Dhoni’s statistics as a captain

It was under his captaincy that India climbed to No. 1 in the ICC Test Rankings in December 2009 and lifted the World Cup after 28 years. In March 2013, Dhoni became the most successful Indian Test captain when he eclipsed Sourav Ganguly’s record of 21 victories from 49 Tests. Amazingly in 2013, Dhoni became the first captain to win all three ICC limited-overs trophies.

Moreover his zest of winning the game, Dhoni, known for his patience and surprising decision on the field. His decision of giving Joginder Sharma the ball to bowl the final over of the ICC T20 World Cup, which ultimately helped Indian team in lifting the cup is the testimony to that.

Besides his decision making, Dhoni is also famous among fans for dropping out big players who were not performing. Some of the players like Virender Sehwag, Gautam Gambhir and Harbhajan Singh were forced to left out because of their poor show.

Virat Kohli took over Test captaincy after MS Dhoni decided to not feature in white jersey anymore in 2014. Since then, Virat Kohli has registered the best record among Indian captains after the first 23 Tests and is only behind Steve Waugh in Test captaincy. The ‘aggressive’ captain is without a defeat in his last 19 Tests, which is the longest streak for any Indian captain. In a short span of time, Kohli has registered the best win percentage among all India captains. 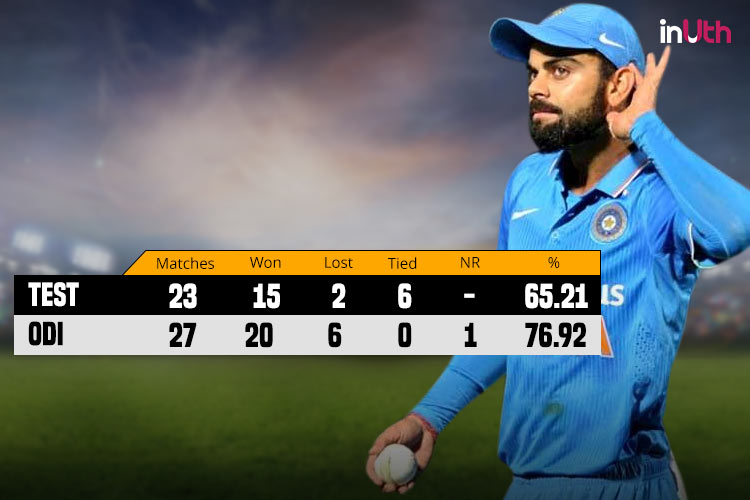 He has that ability to move his players around and to place them at the right position. His field placing, his temperament, his attitude is enough to charge up other players during the match. His encouragement of team members to perform is his big asset.

In early 2017, he became the limited-overs captain as well after Dhoni stepped down from the position. It’s now almost 6 months he took over the top post. But, he is yet to prove that he is best. His recent decisions like bowling first in the recently lost ODI match against Pakistan, not allowing Yuvraj or Kedhar to bowl at a crucial time when Pakistan batsmen hitting Indian pacers all round the park, is the proof that he needs to work on his decision making in the ODI’s.