Cricketers and celebrities often become part of news headlines during elections when they reach the polling booths to cast their votes. Often such incidences inspire other citizens to step out and vote. But recently an incident in Gorakhpur left local election officials in a state of shock. Ahead of the Loksabha bypolls, scheduled to be held on March 11, Indian cricket captain Virat Kohli’s name was found registered under Sahajanwa Assembly segment, with his voter number given 822.

The entire episode grabbed the limelight when a booth-level officer named Sunita Chaubey spotted the mistake. Soon, she informed the senior officials about the matter. According to several media reports, the identification number in the voter list is RHB2231801 and the voter serial number is 822. 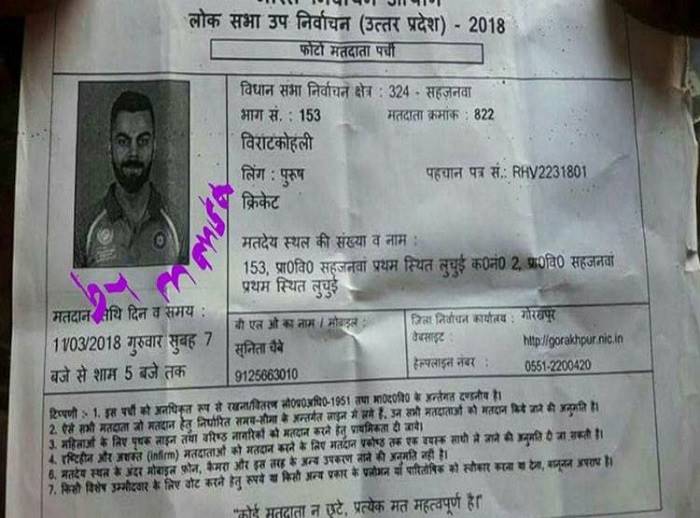 After the blunder came into notice, the Sub-Divisional Magistrate, Pankaj Srivastava, has stated that a probe has been ordered into this entire goof-up.

The Indian skipper has currently been given rest for the ongoing Nidahas Trophy in Sri Lanka. In the absence of Kohli, Indian opener Rohit Sharma has taken the charge of captaincy. Apart from Kohli, other cricketers with the likes of MS Dhoni, Hardik Pandya, Bhuvneshwar Kumar and Kuldeep Yadav have also been given rest by the BCCI. As a result, a bunch of new talents including Rishabh Pant, Mohammed Siraj, Vijay Shankar, Washington Sundar have got a chance to prove their talent.

ALSO READ: Mohammed Shami gets support from his coach and Kapil Dev

India lost their first game to Sri Lanka by 5 wickets while they came back strongly in the 2nd T20I against Bangladesh and won the game by 6 wickets.