Indian skipper Virat Kohli stands nowhere near when it comes to earnings of these global sportspersons. Despite bagging huge deals he is miles away from footballing legends Lionel Messi, Cristiano Ronaldo and basketball stars Stephen Curry LeBron James and James Harden. Kohli’s earning per year literally feels like ‘Peanuts’ when compared to these sportspersons. According to Forbes’ highest paid athletes’ list, Kohli earns $22 million which is over 140 crores when converted to Indian currency. Though the statistics below will show you disparities between Kohli’s salary and other sportspersons.

A large amount of players’ salary comes from the endorsements, deals from different clubs rather than what they earn playing for the nation. As far as statistics are concerned, sportsperson who play sports like Football, Baseball, and American Football bag a better deal than others. That’s the reason why Messi and Ronaldo top the list with the former bagging a $340 million deal.

Basketball player Stephen Curry too had bagged a deal of $200 million deal which was later toppled by James Harden with a whopping $228 million contract which is also a record in NBA history.

Individual sports do not get much bigger deals as compared to others. Though they make up for it with the endorsements as they get a huge amount of money from their sponsors. One such example is Golfer Tiger Woods who made just $100,000 last year but made a gargantuan $37 million for it. 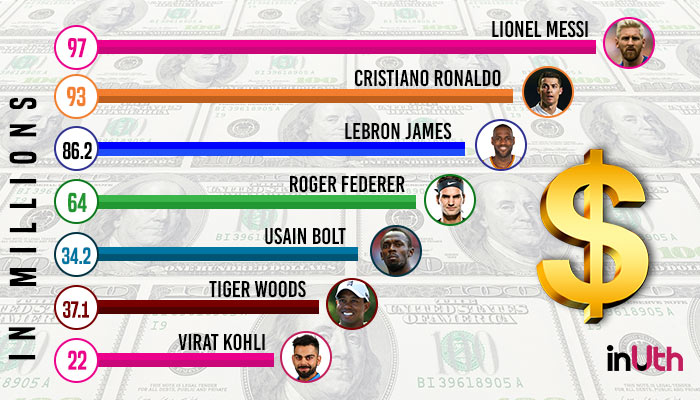 According to the list, it can also be interpreted that female sportspersons earn less when it comes to sponsorships. They get paid less for the sponsorships when compared to their male counterparts. For example, Tennis star Serena Williams who made over two-third of her earnings in endorsements whereas she is the third highest earner in terms of prize money which is $8 million.

As per News 18’s Prahlad Kakkar’s reports, “If Puma had to pay any international star, it would not be less than $5 million a year. They are getting Virat for $2 million a year and that’s a very good deal.” That clearly means that the Indian stars are underpaid when it comes to international brands sponsoring players. Bolt is also expected to earn an extra $10 million if he participates in the 2017 World Championship in Athletics.