Virat Kohli and Anushka Sharma finally tied the knot in Tuscany and put rest to all the speculations that had been making the rounds over the last few days. The wedding ceremony was a plush affair with only the couple’s close family and friends present at the function. The ceremony, which was a private affair, was held at a heritage resort in Tuscany. As per media reports, their wedding reception will be held in New Delhi on December 21. 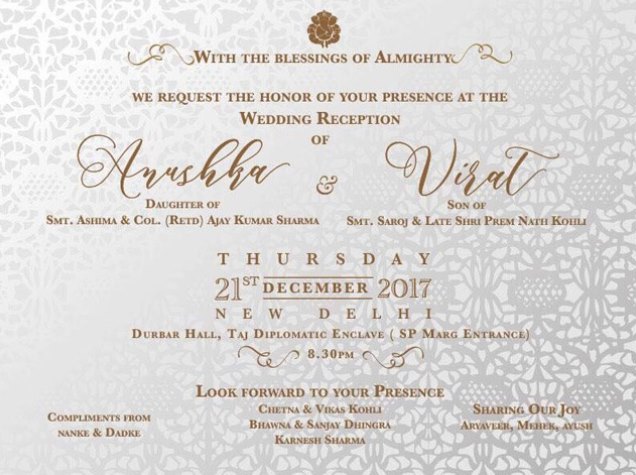 While some on Twitter tried to connect the dots by keeping an eye on their travelling plans, others just failed to determine how the events unfolded right from the beginning. The build-up to the wedding was nothing short of extravagant with the couple only inviting a select few to attend the low-key event.

The highly talked-about couple had been dating for quite some time now. Virat Kohli had requested a break from cricket after the Sri Lanka Test series, which fuelled the rumours of his wedding that had already been gaining momentum.

Here is how his colleagues from the cricketing world reacted:

Congratulations and best wishes to the just married @imVkohli and @AnushkaSharma. You both look wonderful together. #Virushka pic.twitter.com/DqcQN7GrpC

Congratulations @imVkohli @AnushkaSharma on your wedding. May God Bless you two and give you happiness and a rewarding married life.

Congratulations to @imVkohli and @AnushkaSharma on getting hitched. Here’s to your longest partnership in life. Best wishes from the #KKR family! _#VirushkaWEDDING pic.twitter.com/LmGICwZlxx

Shaadi Mubarak, @imVkohli and @AnushkaSharma
May God bless you both with lots of happiness. ___

Congratulations @imVkohli & @AnushkaSharma. Wish you both all the happiness and a long married life! pic.twitter.com/bgD2TPA9dl

Here’s wishing that happiness chases you down the same way you’ve chased impossible targets. Welcome to the club @imVkohli @AnushkaSharma – Wish you a lifetime full of togetherness and love #Virushka pic.twitter.com/WSvdEadP1A

As per reports, the couple will bring in the new year in South Africa and will register their marriage in early January next year. While Anushka will get busy with promotions of her production venture Pari, Virat is going to again wear the skipper’s cap and lead the team on a tour of South Africa comprising of 3 Test matches, 6 One Day Internationals and 3 T20Is.