Slow left-arm orthodox spinner from Jharkhand, Anukul Roy is the latest bowling sensation in Indian U-19 squad. Roy is the bowling all-rounder and currently playing under Prithvi Shaw in the ongoing U-19 World Cup in New Zealand.

Roy grabbed the spotlight after he picked-up his five-for in the Youth ODI of the U-19 WC. Roy achieved this feat during India’s match against Papua New Guinea (PNG) at Mount Maunganui ground on January 16, 2018. Roy took 5 for 14 in 6.5 overs.

Team India, however, won the match by 10 wickets. Earlier, PNG recorded the tournament’s lowest score so far after they slumped to 64 all out in 21.5 overs.

It was his maiden five-wicket haul for India U19s – watch Anukul Roy rip through PNG in Tauranga! #U19CWC pic.twitter.com/DIzKvzROGD

Besides against PNG, Roy also picked four-for against Zimbabwe at Bay Oval, Tauranga, New Zealand on January 19. Roy returned with figures of 4/20 in 7.1 overs.

Earlier, Zimbabwe won the toss and they elected to bat first. Zimbabwe bowled out for 154 after 48.1 overs, In reply, India chased down the target in 21.4 overs without losing any wicket.

#INDvZIM Well bowled lads Zimbabve all out for 154 runs off48 overs Anukul Roy again took 4/20. well It should not be a problem & our lads will make it in about 25 overs.

Yet another stupendous performance by Indian youth vs Zimbabwe U19. Bowled then out for 154, Anukul Roy bags 4 for just 20 #U19CWC #INDU19vZIMU19

Roy has so far picked up 30 wickets in 11 matches. Here are his records: 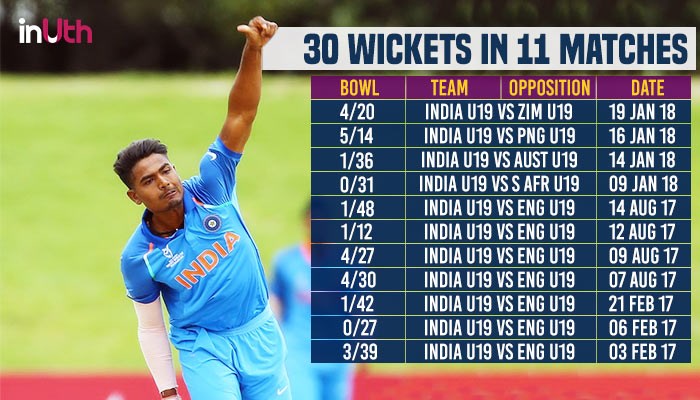 With Indian Premier League 2018 auctions around the corner, one could predict that Roy (courtesy his previous stats) might be on the must-buy list of the franchises.

Eight franchises, including Chennai Super Kings and Rajasthan Royals who are back from serving a two-year ban, would meet for the players’ auction on January 27, 28 in Bengaluru.