In the 3rd and the last One Day International between India and England at the Eden Gardens, among the crowd of 66,000, a man was visible totally different. His upper body was uncovered and was painted in Indian Tri-colour style and on his chest, it was written Virat,18. Ladies and Gentleman, following Sachin Tendulkar’s die hard fan Sudhir Gautam and MS Dhoni’s fan Ram Babu, here we introduce the truest fan of the newly appointed skipper of the ODI squad, Virat Kohli, and his name is Nikash Kanhar.

Bus conductor by occupation, 33-years-old Kanhar hails from Kandhamal district of Odisha. He was seen several times on the television waving the Indian tri-colour at the Eden Gardens throughout the game to cheer-up the national team during the 3rd ODI. Previous to this game, Kanhar had met Kohli on 4 different venues. 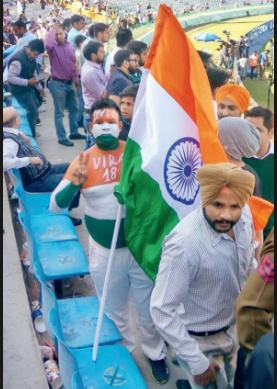 Last year, Kanhar mortgaged his mother’s jewellery without thinking even once as he just wanted to book flight tickets to Chandigarh so that he can watch the third Test match between India and England.

In a statement given to an entertainment website, Nikash said “I took a loan against my mother’s jewellery I got Rs 25,000. I spent Rs 11,000 on booking air tickets from Bhubaneswar to Delhi and back.”

A day prior to the 3rd ODI, Kanhar said,”I have been to Visakhapatnam, Cuttack, Ranchi, Kolkata and Punjab to watch India’s match.”

“I’m not that rich who could afford to watch each every match of India right there from stadium’s gallery. But I still wish I could watch them all. For Virat, I have left behind my responsibilities towards my family,” he added.

He also described how generous in nature Kohli is. He said,”Whenever I met him, he treats me with the best way he could. Each time he asked me about my well-being.”

He also mentioned that watching Kohli detoxifies his mind. He doesn’t care that he is without a secure job or is unmarried at 33. When Kohli gets runs, all’s well with the world, his world to be precise.

Prior to Kanhar, the whole nation has witnessed Sudhir Gautam’s craziness for cricket who even took the police beatings once to meet his idol, Sachin Tendulkar. In return, the master blaster called him up in the dressing room and shared the World Cup 2011 victory with his craziest fan.

After Sudhir, there is another insane person on this planet who goes mad for the former skipper Mahendra Singh Dhoni and remains present at every match of India. His name is Ram Babu and he too colours his body in Indian flag style and writes MSD’s name over it.

With the course of time and Kohli’s speed of gaining success, it was obvious that someday a fan will come up whose cynicism could be seen clearly through the naked eyes. And, as of now, Nikash Kanhar is the one.