Former Sri Lankan captain Angelo Mathews returned to the squad as the Sri Lankan Cricket Board (SLCB) on November 5 announced 15 member team for the upcoming tour of India. The selectors have dropped batsman Kusal Mendis from their 15-member squad. Earlier in the year, the two teams locked horns in Sri Lanka, where India won the series. Sri Lanka would be hoping for a better show in India.

Right-handed opener Kaushal Silva was also omitted from the team that emerged victorious against Pakistan in the recent Test series held in the UAE.

Mathews was ruled out of the Test series against Pakistan due to a calf muscle injury. Since making his Test debut in 2015, the 22-year-old Mendis was being seen as the best batting prospect for Sri Lanka after the retirement of Kumar Sangakkara and Mahela Jayawardene.

Mendis will miss out on a Test match after 22 consecutive appearances since his debut. Former skipper Angelo Mathews returns to the side which features middle-order batsman Roshen Silva as the only uncapped player.

Sri Lanka are slated to play three Tests, three ODIs and as many T20 Internationals in India.

The squad will leave for India on Wednesday. Here is the entire team. 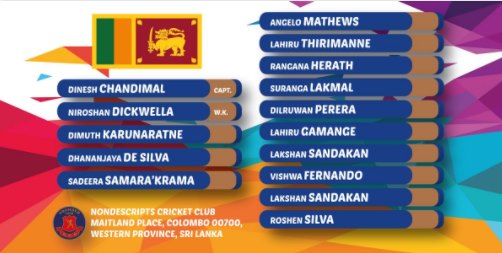 India in the meanwhile have beaten Australia and are on the verge of repeating the same against New Zealand in their backyard since India toured Sri Lanka.