The microblogging site, twitter, suddenly turned into a heated battlefield on February 3, after two Indian cricketers got embroiled in a ‘word-war’ against each other. A series of posts were exchanged between both of them within the 140-character limit and the conversation between them spread like a wildfire, with people started sharing it on their profiles.

The matter happened between cricketer turned commentator, Akash Chopra, and Indian fast bowler S Sreesanth, who has been out of the Indian team for almost 3 years now after he was named in a spot-fixing row during the Indian Premier League season 7.

In recent times, Sreesanth, who has been given a clean chit by the court, has been posting his videos and messages on the social platform so that he could spread the message about his fitness and love towards the game.

Yesterday when a twitter user asked Chopra whether Sreesanth could make a comeback and represent Indian team in near future?

And in reply, the former Indian opener straight away denied and said a big ‘No’.

@cricketaakash Never known you to be that emphatic, friend.

I’m a bit of a hardliner when it comes to match-spot fixing…for expunging records and setting precedents. But that’s my opinion. https://t.co/X8OXh4KNSr

Another Twitterati then enters and puts his question in Hindi 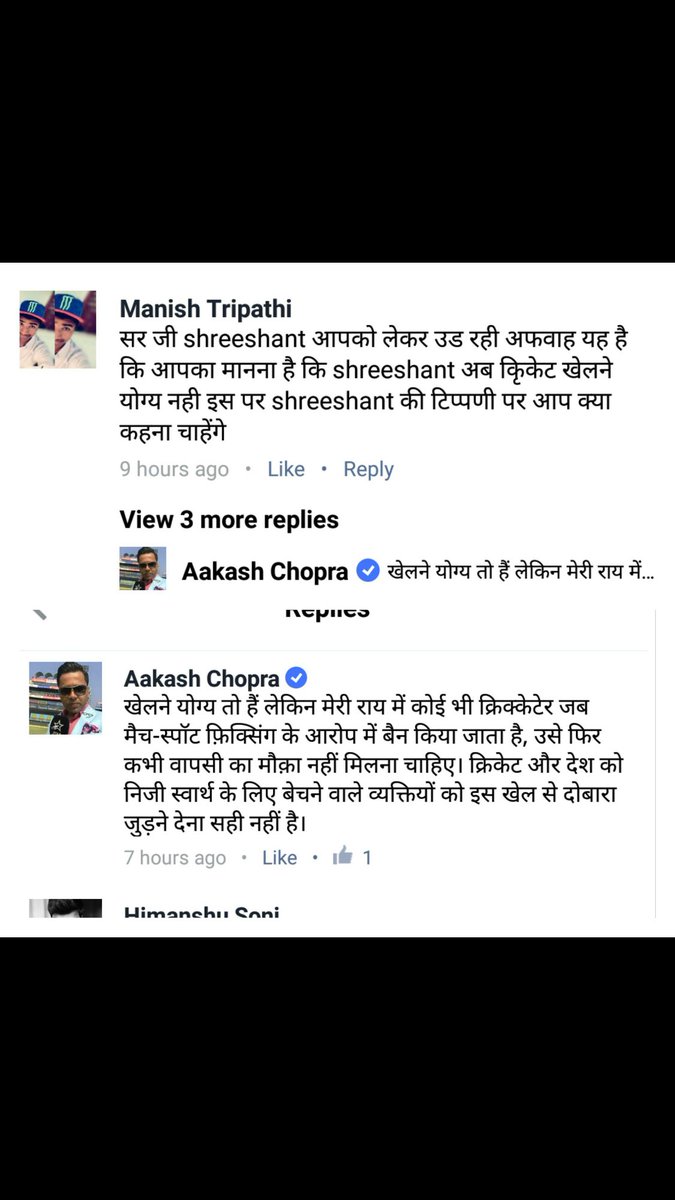 And finally, finding himself at the receiving end and highly disappointed, Sreesanth entered in the scene and what happened next, you can see it in the below-mentioned tweets.

@cricketaakash how can u be so 2 faced?? Bro?? Ashamed to even call u that ..really sad to know (what have u replied?? Really..I will play pic.twitter.com/r4Ervw5sox

Not two-faced. That’s my opinion and I stand by it. Never told anyone anything else. I would have the same opinion for my own brother. https://t.co/gGSLqXbZui

@cricketaakash I will play for the country no matter how small my chances are..trust me on that..mai cricket Dil jaan se kheltha u

Now, whether Sreesanth gets the ticket to team India or not, time will exhibit one day, but this heated conversation between the two has taken quite a limelight in the social media.