Young Indian colts led by Prithvi Shaw beat Pakistan to enter the finals of the U-19 World Cup at the Hagley Oval, Christchurch on January 30. Shubman Gill played the heroic knock of unbeaten 102 to guide his team to a comprehensive 203-run victory over the arch-rivals.

Openers Prithvi Shaw (41) and Manjot Kalra (47) provided the team with a solid start before they lost their first wicket at 89.

Then came right-handed batsman Shubman Gill at the crease. He played sensible 102* runs knock off just 94 balls to guide his team to set a fighting 272 runs total for Pakistan. He kept on losing his partners at the other end but he kept himself focused and completed his ton.

During this course, Shubman, who was bought by the Kolkata Knight Riders at a whopping Rs 1.8 crore for the IPL 11 season, became the first Indian U-19 player to hit a century in a World Cup game against arch-rivals Pakistan. 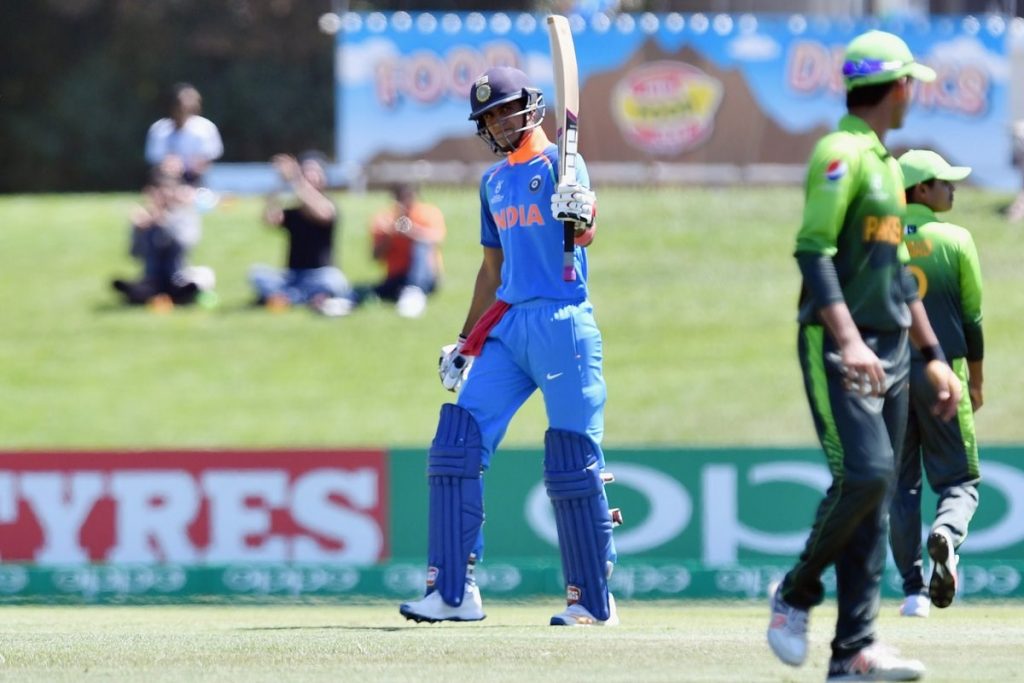 Besides, he also broke a U-19 World record by becoming the only batsman to hit 6 consecutive half-centuries in the U-19 World Cup history. He pipped Upul Tharanga, Xavier Marshall, Gaurav Dhiman, Matthew Breetzke and Ryan Higgins to make the record his own.

For Pakistan, Muhammad Musa and Arshad Iqbal were the picks of the bowlers as they picked up 4 and 3 wickets respectively. Their star pacer Shaheen Afridi grabbed just 1.

In reply, Pakistan got off to a poor start as they lost their 4 wickets in quick succession while chasing 273 runs to win. Indian pacer Ishan Porel rattled the Pakistani batting line-up as he sent back 4 Pakistani batsmen in his first spell of 6 overs.

Pakistan kept losing wickets and they were bundled out for just 69 runs.

Shubman Gill for his match-winning knock received the ‘Man-of-the-Match’ award.

Shubman Gill is the Player of the Match for a fantastic 102* that set up a massive #U19CWC semi-final win! #PAKvIND pic.twitter.com/xIpFEUXDdb

For India, Ishan Porel picked up 4 wickets while Shiva Singh and Riyan Prayag claimed 2 wickets each. Anukul Roy and Abhishek Sharma bagged 1 each.

Pakistan are dismissed for just 69 in a massive 203 run win for India!#PAKvIND scorecard __ https://t.co/aTD1zG1zCU pic.twitter.com/JrXFtaMgfY

Team India will now face Australians in the finals scheduled to be held on February 3. Australians made it to the finals after they thrashed Afghanistan in their semi-final tie held on January 29.