With Virat Kohli and Co. taking on the New Zealand in the first T20I of the bilateral series, openers Rohit Sharma and Shikhar Dhawan went past the record of highest opening partnerships in the T20I matches for India. Surpassing, the record total of 136 scored collectively by Virender Sehwag and Gautam Gambhir against England in World T20 2007 in Durban, Rohit and Dhawan scored 158 runs against New Zealand at the Feroz Shah Kotla Stadium on November 1.

Earlier, Kane Williamson won the toss and elected to bowl first. However, Shikhar Dhawan and Rohit Sharma made sure that Kiwis should regret their decision. Both the batsmen left no stone unturned to ruin the Kiwi bowling attack. On one hand, Dhawan came up with his 3rd T20I career fifty and was rapidly heading towards his maiden ton while on the other, Rohit had also turned his beast mode on and also scored his 12th T20I fifty.

Let’s have a look at the top 5 opening stands in T20Is till date:

Here are the Indian highest opening partnerships in T2oIs 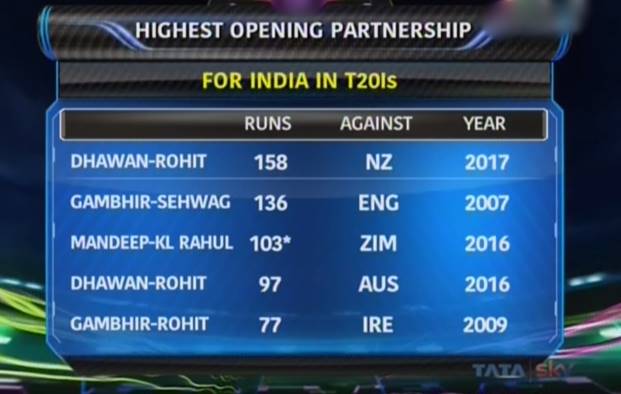 Later, Team India lost three wickets in the middle of the game, however, skipper Virat Kohli and MS Dhoni ended up the inning in style. Kohli scored 26 runs off 11 balls including 3 sixes while Dhoni, who came to bat in the last over, scored 7 runs in 2 balls. India scored 202 runs by the end of 20 overs after losing 3 wickets.