India’s stand-in captain Rohit Sharma showed he has a golden heart after he helped a Sri Lankan cricket fan return to his country so that he could attend his father who needed an urgent surgery.

Mohamed Nilam from Sri Lanka had come to India to attend the ongoing Sri Lanka Tour of India, 2017 starting November 16 to December 24. Nilam, who had earlier made travel arrangements according to the schedule, was forced to cut short his trip after his father needed an urgent surgery for throat cancer. But he didn’t have enough money to book another ticket. 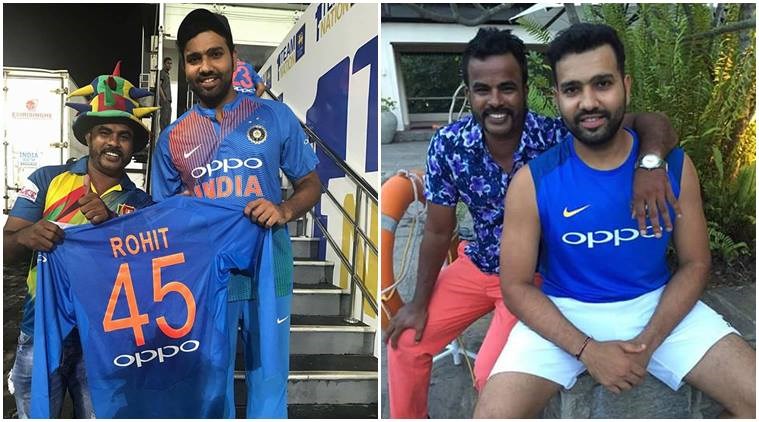 However, Sudhir Kumar, Sachin Tendulkar’s iconic fan and a regular member in the stands, every time India  plays, came to his rescue. He approached Rohit for help who readily agreed. According to the reports, Rohit gave Nilam Rs 20,000 (approx) to book his return ticket. All this happened during the third and final Test at the Feroz Shah Kotla in New Delhi which was ended in a draw.

Nilam while sharing his experience with indianexpress.com from Sri Lanka said:.

I’m very thankful to Rohit Sharma for his help. He is a very nice man and has a good heart

Nilam also went to reveal that it was not just Rohit, but Virat Kohli too approached him and offered him help with his father’s treatment.

Virat also messaged me and asked about my father’s health. He said ‘if you need any help, tell me’

Meanwhile, Rohit Sharma, who is leading the Indian side in absence of Virat Kohli, scored another double century in ODIs and became the first batsman on the planet to score three double centuries in white-ball cricket.

A captain’s knock. @ImRo45 has looked in full flow and has marched on to a well-made century. ODI Century no. 16 #TeamIndia #INDvSL pic.twitter.com/qWtwNpp7dr

In his 208* run knock, Rohit smashed Sri Lankans bowlers all around the park. During his stay at the middle, Rohit scored 12 sixes and 13 fours.

How can we let our double centurion @ImRo45 go without cutting a _ but @ajinkyarahane88 and @yuzi_chahal were not going to stop at that. #TeamIndia #INDvSL pic.twitter.com/QP27ZWexsD

The three-match ODI series is now level at 1-1. The final match will be played at Vizag on December 17.