It is not always that you get to see famous cricketers travelling freely via public conveyance. English cricket team is currently playing a Test series against South Africa. With the ongoing series coming to the limelight because of good cricket from both teams, something else is making the news. Can you guess? It is difficult to guess as the English cricketers did something that has clean bowled the entire world. Well, they opted to take the United Kingdom ‘tube’ (a kind of a metro), to reach the ground in time for the match.

Currently Oval is hosting its 100th test match and England and South Africa are locked in an intense battle and that is exactly where they were headed. It is a grounded, humble gesture shown by the English cricketers. They also seemed to have been enjoying the entire episode at least that is what the Twitter exchanges between Joe Root and Stuart Broad prove.

Meanwhile, on the field, Toby Roland-Jones got his debut off to a dream start picking a fifer as England took a 178-run first inning at The Oval on Saturday. Heading into Sunday, they would be chasing a big win as that would mean England take an unassailable 2-1 lead in the 4-match Test series.

The entire team seems to be enjoying their morning drink at the metro station, which happens to be a public place. Hats off, one must admit!

You can even see the smug look of self-satisfaction from behind him pic.twitter.com/pSm7LKMIXO

Almost as smug as this one! pic.twitter.com/QvfhdjSyrb

In the picture, one can spot Ben Stokes, who got a breathtaking ton in the Test, James Anderson, Joe Root and Johny Bairstow among others. 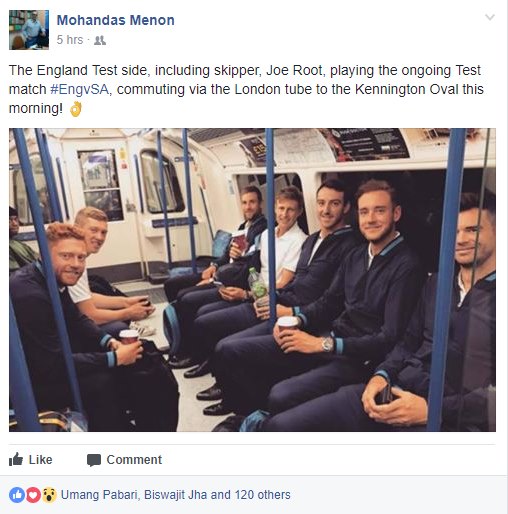 It seems that some other teams can also pick a leaf or two from the English Cricket Team diaries.