Dreams do come true! 17-year-old Yashasvi Jaiswal has set an example for those who dream big. A middle-order batsman, Jaiswal is all set to represent U-19 Indian cricket team during the upcoming Sri Lanka tour.

The young lad faced a lot of struggles before securing a spot in India’s U-19 team. With a dream to represent his nation one day, Jaiswal, son of a small shopkeeper in Bhadohi, Uttar Pradesh, moved to Mumbai. In Mumbai, he met his uncle Santosh who was a manager of Muslim United Club. Santosh’s house wasn’t big enough for another occupant so he requested the owners of the club to allow the boy, who was then 11 years old, to stay in a tent.

Jaiswal then lived with groundsmen in the Muslim United Club’s tent at the Azad Maidan ground in Mumbai for three years. Jaiswal told The Indian Express,

“This was after I was asked to leave the dairy at Kalbadevi. After playing cricket the entire day, I would get tired and go to sleep. One day, they threw out my luggage saying I do nothing, don’t help them and only sleep.”

For the next three years, Jaiswal used to train hard in the morning and sleep in the tent along with the groundsmen of the club at the Azad Maidan ground in Mumbai. He, however, was struggling to make ends meet. So, he started selling pani-puri during Ram Leela and also sold fruits to earn a living. Apart from this, Jaiswal also used to play matches with older boys to earn Rs 200-300 per week. 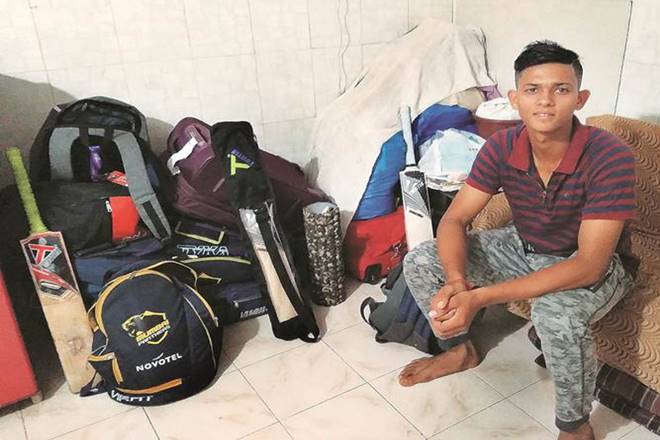 Despite all that, he had to sleep on an empty stomach many times.

“During Ram Leela, I earned well. I prayed that my teammates would not come there for pani-puri. Sometimes they did and I would feel bad serving them,” the youngster added.

Mumbai U-19 coach Satish Samant has predicted that Jaiswal will be the next big Mumbai player.

“He has this ability to read a bowlers mind and adapt to a situation. Most under-19 players get tempted to play too many shots too early. He does not. The other thing is, he does not have a smartphone, is not on WhatsApp. This is rare for a teenage cricketer these days. He is cut off from social media. He has talent and if he keeps focus like this, he will be next big from Mumbai player.”

Following his selection, Jaiswal now lives in a small chawl in Kadamwadi.

He made it to the U-19 limited-overs India side which will tour Sri Lanka in July. The team is set to play two four-day and five one-day matches during the tour.