MS Dhoni has not been as active on Twitter as compared to other cricketers. For a while, he has only been posting the links to photos and videos from his Instagram account or an occasional promotional tweet of his brand. Forget about replying to someone’s tweet, it has been three years since Dhoni has even liked a tweet. But, after a gap of three years, Dhoni liked a tweet and you will be shocked to know what the tweet is.

Dhoni has liked only three tweets since he joined Twitter. That includes tweets from journalist Rajdeep Sardesai, BCCI and the most recent being of a news website.

Here’s the screenshot of Dhoni liking this tweet. Though it is possible that he might be trolling them. 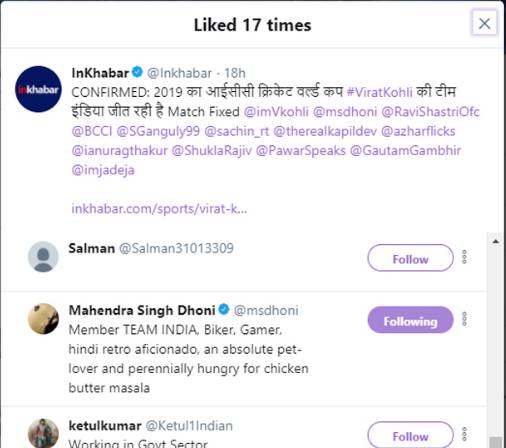 Apparently, the website speculates that India will win the World Cup as Virat Kohli—the skipper of Indian cricket team—got married just before the tournament. They pointed out that even Kapil Dev and MS Dhoni won the World Cups in 1983 and 2011 respectively just after they got married.

Dhoni was recently in news after a video of him defeating Hardik Pandya in a 100-metre dash went viral on social media ahead of the 2nd ODI against Sri Lanka at home.