25-year-old Megan Schutt on March 26 became the first Australian woman to claim a hat-trick in international cricket. Schutt claimed this feat during the 4th T20I match against hosts Indian Women Team at the Brabourne Stadium in Mumbai.

In the second over of Indian innings, Schutt bowled full on the toes of Mandhana, who was batting at 3. Indian opener missed it completely and the ball was struck on her back leg. The ball later deviated back to crash onto the stumps.

Schutt’s next victim was India’s most experienced batswoman Mithali Raj. Schutts bowled the last delivery of the second over, a full length that came back a bit. Mithali tried to hit with a horizontal bat and the ball took the inside edge to kiss the stumps in the end.

Schutt waited for the 5th over to bowl her hat-trick ball as she was taken off the attack by her captain Meg Lanning.

Deepti was Schutt’s third victim as she played straight in the hands of Amanda Wellington standing at mid-off.

Megan Schutt claimed a hat-trick as the @SouthernStars booked a spot in the tri-series final: https://t.co/eXVYl6skl6 #INDvAUS pic.twitter.com/Vk0tQCW9Sm

Earlier, Australia set 187-run target for India after they were asked to bat first.

For Australia, Beth Mooney and Elyse Villani were the top run-scorers with 71 and 61 respectively. 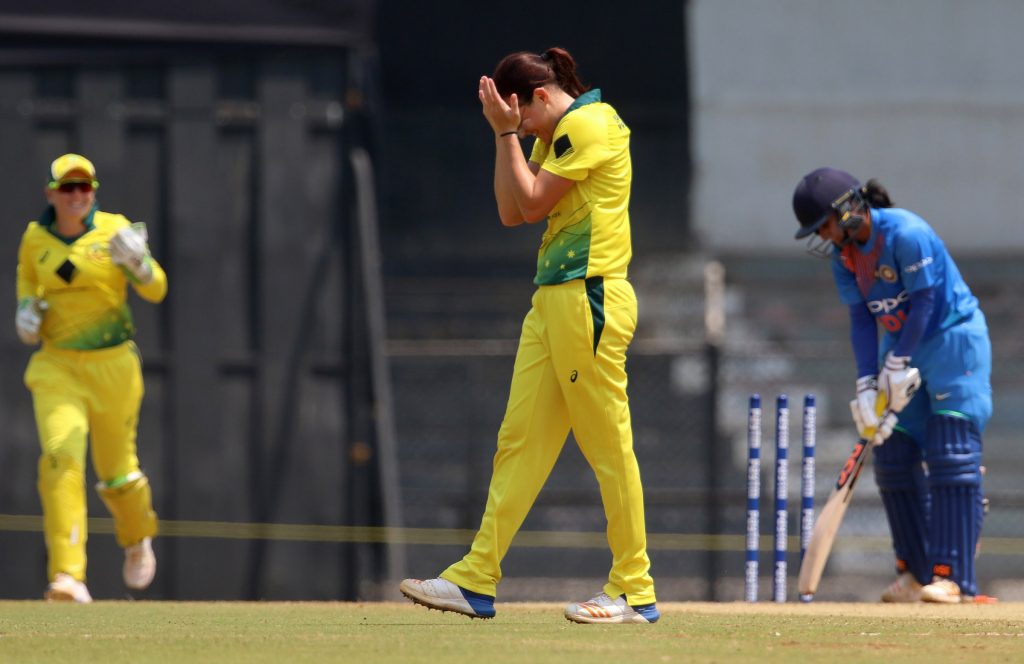 Pooja Vastrakar was the pick of the bowler for India as she claimed two wickets in 3 overs she bowled.

In reply, India could only manage to score 150 in their allotted 20 overs. Jemimah Rodrigues was the top scorer with 50.

With this loss, India were eliminated from the tri-series tournament.

England and Australia have fixed their berths in the final as they won 2 matches each. The finals will be held on March 31.