Appearing on Gaurav Kapur’s podcast, 22 Yarns, veteran sports journalist Ayaz Memon recounted one of the most memorable days of his career. Covering the ’83 cricket world cup, Memon was a few minutes late for India vs Zimbabwe, a match many wrote off as an one of the most inconsequential ones of the tournament. As he entered the ground, Memon was greeted by a nervous-looking Gundappa Vishwanath on the porch of the dressing room. “What is happening?”, Memon asked in his youthful exuberance, and all Vishwanath managed to say was – “nothing to worry about…”

Confused and anxious, Memon looked up at the scoreboard. 9/4. Gavaskar, K Srikanth, Amarnath, Sandeep Patil… all sitting in the pavilion.

When India arrived in England for the ’83 world cup, the expectations were low. Something that was reflected accurately in the now-famous 66-1 odds given to the Indian team of winning the world cup by the bookmakers. India had been substandard in their first two world cup campaigns, winning their only match against East Africa. And it’s something that most cricketers like K Srikanth and Sunny Gavaskar knew, even before they began the ’83 world cup campaign. They’ve mentioned how they had booked their vacations after the tournament’s preliminary stages. The team had individually talented players, however, there was nothing galvanising them. Enter Kapil Dev.

The 24-year-old all-rounder from Haryana was quite young to be captaining at the world cup, which was hardly surprising considering the revolving door situation around Indian captaincy at that time. Dev made his debut primarily as a bowler, but he was about to change Indian cricket forever with the bat, in that innings against Zimbabwe. Going into bat at 9/4 after Sandeep Patil got out, the Indian captain joined Yashpal Sharma at the centre. Memon recounted how the ball was seaming, and was hence a difficult pitch to bat on. Dev held his nerve, but even Sharma left his side. The score now read 17/5.

Despite not being favourites for the tournament, India were still expected to steamroll Zimbabwe, a team that weren’t even accorded the status of a Test-playing nation. And now, they looked set to be humiliated. The world cup campaign never mind, but to lose to an Associate Member, would be embarrassing for any team. Enter Dev, who single handedly changed the morale of the entire dressing room. Putting up 60 runs with Roger Binny (22), and another 62 with Madan Lal (17), Dev went berserk during his partnership with wicketkeeper/batsman Syed Kirmani. Forging an unbeaten 126-run partnership with Kirmani (24*) for the 9th wicket, Dev went from 100 to 175 in only 38 balls. 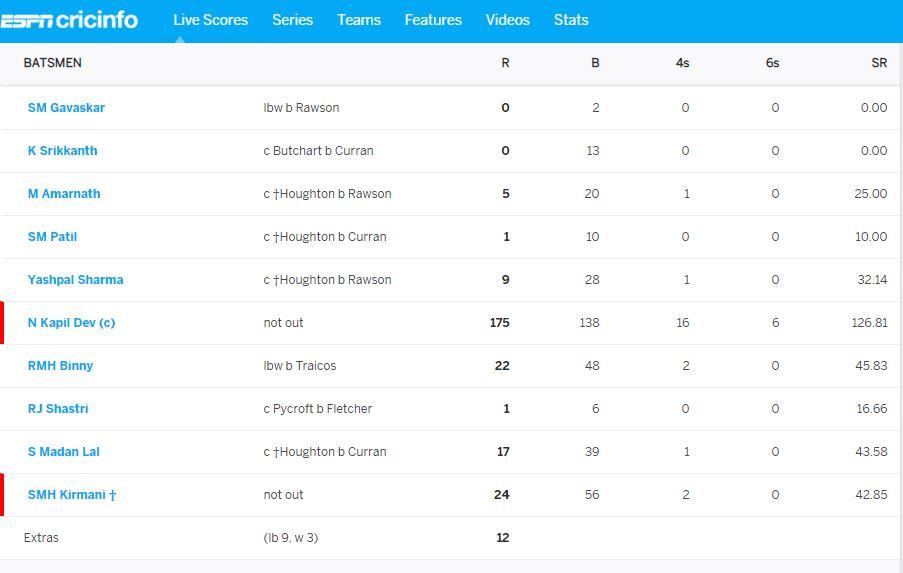 We have to be mindful of the conservative times, when a strike-rate of about 65-70 was considered par, and anything above 80 was considered as an ‘aggressive’ innings. And here Dev was hitting the ball with a strike rate of 200! Helping India to a competitive score of 266/8 (from 17/5, mind you!), Dev’s innings injected the much-needed adrenaline into India’s campaign. This wasn’t a time when things like ‘positive mindset’ were spoken about a lot, and Dev’s innings turned that around in the Indian dressing room, with many awed by this explosive performance that won them a seemingly lost match.

Beating Zimbabwe by 34 runs and hence qualifying for the semis against England, India obviously went on to win the world cup that year. Beating a seemingly invincible West Indies side in the finals, cricket became a newfound passion amongst most Indians. However, what many forget is that the fire was lit by Dev’s innings against Zimbabwe. Maybe it’s fitting that match wasn’t recorded for broadcast (because BBC was on strike that day) only furthering the myth of this legendary knock.