Everyone is entitled to their opinion but does that give anyone the freedom to shame and attack someone in the name of religion? The answer is no. Unfortunately, this has become a trend. To name a few, Sania Mirza was subjected to a ‘fatwa’ for ‘leaving nothing to the imagination’ by wearing a skirt on the tennis court. Then it was Indian pacer Mohammed Shami’s wife Hasin Jahan who was shamed for not wearing ‘appropriate clothes’ as per her religion. Some misogynistic individuals did not refrain from slut shaming Dangal actress Fatima Sana Shaikh for wearing swimwear during Ramadan. The list goes on, but this time, the ‘shamers’ stooped to a new low.

This time around the “guardians of morality” targeted Indian cricketer Irfan Pathan’s wife Safa Baig for not covering her face and hands well enough in a photo that he recently shared on Facebook. Trolls are going all out to teach Irfan Pathan to teach his hijab-clad wife to cover her arms. Yes, arms. Some social media users are also being shaming her for wearing nail polish while terming it as “un-Islamic”.

The comments posted on Pathan’s photo on his Facebook wall are nothing but appalling. They claimed that covering her arms was her “Farz” (duty). Yes because showing wrists apparently made her hostile to religion. It must be noted that his wife Safa Baig who is social media’s new target was a model from Saudi Arabia and has been seen wearing a ‘Hijab’ in every public appearance she has ever made post her marriage with Irfan Pathan.

She quit her modelling career after she got married to the cricketer. All she did to invite the hate and barrage of criticism was to be in the same frame with her husband while showing her arms and oh yes, she wore nail paint.

Without further ado, we’ll show you the picture that created a storm on social media. 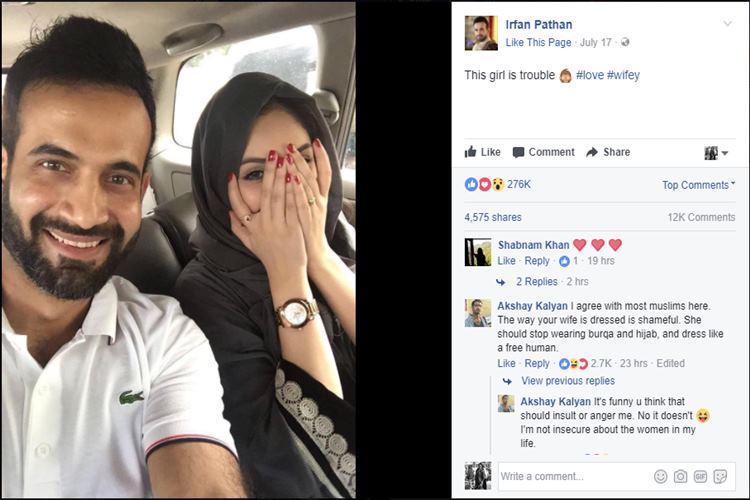 Yeah, this one. No kidding.

Someone also posted a photo of two lollipops one without the wrapper filled with ants and a packed one with a caption “That’s why hijab is important to Islam”. Such literary gems.

Seriously, guys, there are so many other things that you actually need to worry about. Instead of trying too hard to suppress women, speak about poverty and world peace may be?  Because here’s the thing. Women across the globe are going places and will continue do so.  Stop telling women what to wear and how to behave in public just so they can fit into your idea of a “perfect” woman.