The Indian Premier League (IPL) 2018 mega auctions took place in Bengaluru on January 27 and 28 where all the 8 teams gathered to reframe their sides. Since a total of 578 players were to go under the hammer, it was a huge task for the think tanks of each franchise to act wisely before spending crores on a particular player. Several known faces from the cricket and Bollywood fraternity were seen scratching their heads while bidding for the players. Meanwhile, a new face was spotted in the Kolkata Knight Riders (KKR) camp which made every viewer wonder who she was?

Here is the picture of that person who was seen for the first time in the IPL arena: 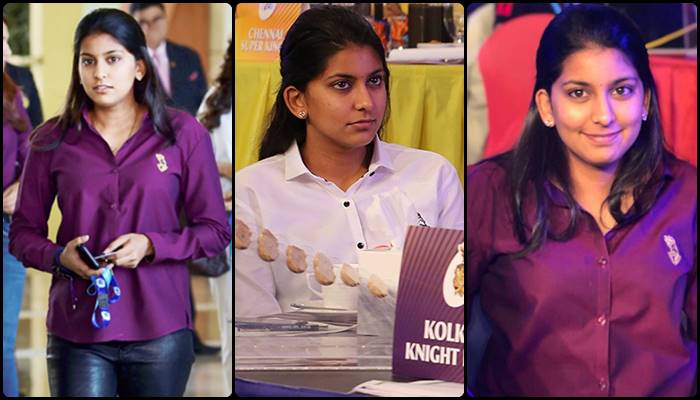 She is Janvi Mehta, daughter of actress and KKR co-owner Juhi Chawala. We have seen Juhi in the stands during the matches of KKR but it was the first time that her daughter took part and was an integral part of the KKR management team.

Jhanvi accompanied her parents, Juhi Chawla and Jay Mehta during the auctions. According to several media reports, Janvi and her brother Arjun are studying at the Charter House Boarding School in London. It has also been learned that last year, she was also seen at the Eden Gardens during the KKR’s game.

After the astounding , record breaking match at Eden Gardens

Here are some of the glimpses from the mega auctions where Jhanvi could be seen taking part in various discussions with the team:

Forget the madness of the #VivoIPLAuction– it’s awesome to meet the super smart Janvi Mehta who gave me a run for our money #smartgirlsrock pic.twitter.com/fi0bnHddVC

In the auctions, KKR have got 19 players in the team including 7 overseas cricketers. They have retained Robin Uthappa, Piyush Chawla, Kuldeep Yadav via RTM. They are yet to announce their captain.