Andre Russell entertained the entire crowd present at the MA Chidambaram Stadium on April 11 when Kolkata Knight Riders (KKR) played against Chennai Super Kings (CSK). He had turned the beast mode ‘on’ and the way he batted was totally enthralling — 88 runs in 36 balls, including 11 sixes and 1 four. Despite his monstrous knock, MS Dhoni’s yellow army managed to take the game home.

A few hours after suffering defeat in the nail-biting match, Russel shared a video for the KKR fans. In the video, Russell, along with teammates Sunil Narine, Shubhman Gill and Kamlesh Nagarkoti, could be seen dancing with KKR team owner Shah Rukh Khan. All five of them grooved on the track Chammak Challo from Shah Rukh’s film Ra.One.

ALSO READ: IPL 2018, RR vs DD: Ajinkya Rahane Is Only A 50 Away From Taking Over Chris Gayle & Shane Watson

Fun time with the boss himself! #SRK

Post-match parties in the IPL is not a new concept in which cricketers shake-a-leg to celebrate the win. It’s yet not confirmed whether this party happened right after KKR’s loss to CSK. But that’s the case, then it was a great idea from King Khan to lighten the mood of his team, including the youngsters.

ALSO READ: IPL 2018: Vinay Kumar Responds To Trolls After He Failed To Defend 17 Runs In Last Over

The 52-year-old Bollywood star was there to support his team in both the games they played. His expressions said it all after CSK’s Ravindra Jadeja hit that winning six. However, being an owner of a cricket team, Shah Rukh too kept the sportsman spirit up and was spotted clicking pictures with MS Dhoni’s daughter Ziva. 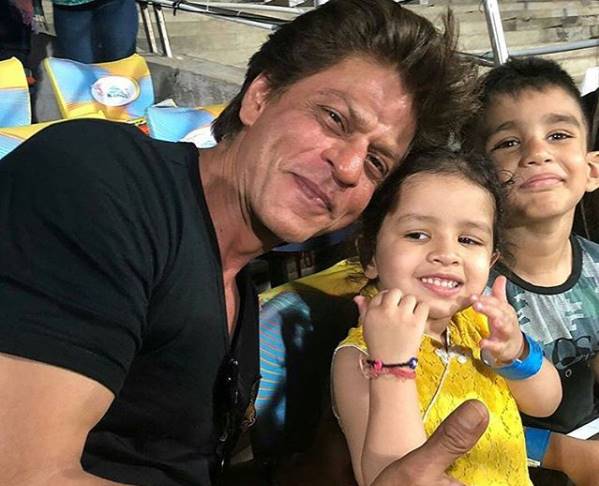 After losing their second game to the CSK, KKR will play the Sunrisers Hyderabad on April 14 at the Eden Gardens, Kolkata.