It seemed like the Indian Premier League (IPL) fans will witness the first-ever super-over of this season. But Billy Stanlanke was in some other mood. The Sunrisers Hyderabad needed just one run of the last ball that with only one wicket in hand. Probably he remembered what Ravindra Jadeja did to the Kolkata Knight Riders and thus, hit the final ball boundary to pull out a terrific victory for his team. After Chennai Super Kings, SRH becomes the 2nd team to win all the two matches so far. Hard for the Mumbai Indians as they are yet to open their account in this tournament.

In case you missed the action, scroll down and relive the game:

23:53 IST Done and dusted by the SRH yet again. Halted Mumbai to grab their first victory as a boss and won the game by 1 wicket.

23:35 IST The business is not finished yet. SRH started it like a boss and now, they are struggling badly to get those 11 runs. Last over, 1 wicket in hand and 11 needed off 6. Will SRH make it?

23:17 IST Though the first half of the game was a bit boring. However, the entire plot has changed towards the end. MI in search of wickets while the Baroda boys – Deepak Hooda and Yusuf Pathan are fighting hard to grab their second victory. Who said IPL is boring? [SRH need 12 to win off 15 balls]

22:57 IST This young gun from Mumbai camp is carving the way for MI’s victory. What a superb spell the young man is delivering. 4 wickets in the second match of his IPL career. The Mumbai supporters who have lost their hopes earlier are now praising him!

He has been reassuring the captain’s belief in him.
Mayank Markande- pic.twitter.com/gBu2KfuCTa

22:50 IST Mayank Markande has suddenly risen up as the shining star in this game. three crucial wickets and it’s not a joke in any case. People on social media are going gaga after watching his magical spell.

20 year old @MarkandeMayank proving to be a game changer for @mipaltan Game On. #SRHvMI #IPL2018

22:45 IST What is going on at the Rajiv Gandhi stadium. They started like a volcano but now, falling like a house of cards. Top three batsmen are back to the dressing room and the SRH dugout is under pressure.

22:38 IST It seems the Mumbai bowlers are trying to sneak into the game. Two crucial wickets were taken by them and both came because of the DRS system. It seems the MI fans are back into life. Meanwhile, the SRH fans are like

22:08 IST Seems like Shikhar Dhawan is carrying his good form yet again for the SRH. What a perfect start he has given. Unlike his opening partner from Team India, Rohit Sharma, Dhawan’s bat is yelling fire right now

21:39 IST And finally, MI managed to score 147 runs in their quota of 20 overs. A perfect bowling from the SRH which completely bamboozled the opponents. Now, will the hosts be able to chase it down? Well, fans think it is possible!

21:12 IST Another blow to the MI and its fans. He looked like a saviour at one point of time but now he has returned to the dressing room. Yeah, we are talking about big man, Kieron Pollard. God knows, what has happened to Mumbai batsmen today?

21:00 IST A great game is going on currently at the Rajiv Gandhi International Stadium in Hyderabad. Lots of misfields yet MI batsmen are struggling to get runs. None of the batsmen has played an authentic knock so far. Meanwhile, the fans on Twitter are sending supernatural blessings to this game!

20:53 IST Mumbai Indians at a very critical position right now and the fans want Kieron Pollard to do some miracle. Will he do the same? Fingers crossed!

20:44 IST Not a  good show from the guests tonight. the MI batsmen got multiple lifelines but failed to make something big out of it. After 9 overs, MI – 72/4

20:33 IST Siddharth Kaul has definitely created a buzz in Hyderabad and in social media. Two wickets in his very first over. Is he drawing powers from his hair band??

Somebody take off ‘Head Band’ of Siddharth Kaul. He might lose his power. #SRHvMI

20:26 IST Rohit is the only Indian player to carry his form from national Indian team to IPL’s Mumbai Indians team, that’s what fans are saying right now, Sorry for those who chose him in their Fantasy Cricket teams.

Rohit Sharma to his talent pic.twitter.com/7JK4WHbiz3

20:08 IST Sorry fans, no more hits from the hitman. Rohit Sharma lost his wicket so early and the fans are totally disappointed.

#SRHvMI
Sachin: I get a feeling that you will score good knock tonight

20:05 IST Rohit Sharma gets a life in the first over and now the SRH fans couldn’t just believe it. 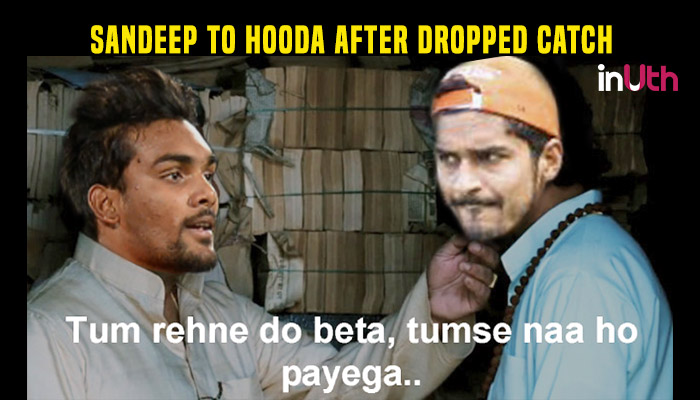 19:36 IST The game is about to begin. Before that, SRH has won the toss and have elected to field first.

Here’s the playing XI of both the sides

19:20 IST Last time it was ‘Gabbar’ Shikhar Dhawan who wrapped up the things for SRH. Will continue his form tonight?

19:10 IST Both the side are excited about the clash and so are the fans.

Since Hardik Pandya was injured while batting against the Chennai Super Kings, there are chances that he might get dropped from the team. If it happens, then bowler Pradeep Sangwan might get a chance in the team.