Pavan Deshpande, the left-handed batsman from Karnataka’s Dharwad district, is one of the newest additions to Royal Challengers Bangalore squad to play in the upcoming season of Indian Premier League. The 28-year old batsman was roped in by RCB at his base price of Rs 20 lakh during the IPL players’ auction held in Bengaluru in January.

Pavan proved his mettle by showing his scrupulous batting skills during his Ranji Trophy debut in 2016-17. His consistent superior performance at the Karnataka Premier League soon rendered him a spot in Karnataka’s Syed Mushtaq Ali Trophy 2018 campaign, and there has been was no looking back for Pavan ever since. 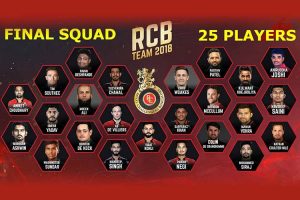 Background
Pavan Deshpande hails from Dharwad, a district in the state of Karnataka. Interestingly, Karnataka is also home to several legendary Indian cricketers such as Rahul Dravid, Anil Kumble and Venkatesh Prasad. It’s only a matter of time before Karnataka adds another invincible cricketer to the Indian cricket team.
Pavan’s hometown Dharwad is a quiet and amiable city located in the northern part of Karnataka. With popular universities such as Karnataka University, Agriculture University, DM College of Engineering and Technology and several situated in the city, Dharwad is a popular educational hub of India.

Pavan Deshpande: The stellar performer
Born on September 16, 1989, the young and agile Pavan Deshpande showed his exemplary skills with the bat quite a few times before he found a place in RCB squad for IPL 2018. During the Vijay Hazare Trophy campaign in 2018, Pavan played a dual role for Karnataka — a dependable as well as an aggressive player. Despite being a player of the middle-order batsman, Pavan delivered a flawless inning by scoring 310 runs at almost a-run-a-ball rate.

After a laudable performance at the Vijay Hazare Trophy campaign, Pavan’s efforts came to fruition when he became a doubtless choice for Royal Challengers Bangalore Team, who were on a lookout for young and local talent.