Finally, the Royal Challengers Bangalore won their first game in the Indian Premier League (IPL) 2018 as they beat Kings XI Punjab by 4 wickets. First, a superb bowling from Umesh Yadav and then a massive knock from AB de Villiers helped Virat Kohli & Co to pull out their first win this competition. Moreover, it was Virat’s wife Anushka Sharma whose presence turned out to be the lucky charm for the home team. The entire Chinnaswamy stadium erupted in joy after Washington Sundar hit the winning runs and clinched the victory with 4 balls to spare. After this victory, RCB stand at the fifth position on the points table.

In case if you missed the live action, scroll down and feel the heat of the game.

23:38 IST And Anushka Sharma’s presence created the difference. RCB wins their first game by 4 wickets against the KXIP. The RCB fans can have a sound sleep tonight. Hard luck for Punjab.

23:32 IST Last over, 5 needed from the last 6 balls. Fans of both the teams along with the players, Anushka Sharma, Preity Zinta, Virender Sehwag, every single one is holding the nerve, what’s gonna happen now?

23:25 IST When AB de Villiers plays, every single viewer falls for him. His insane batting cannot be ignored ever. Anyone can go crazy for his batting. Even after losing his wicket he doesn’t lose his fan following.

Thank you AB for such a stunning innings, you’re louuu. #respect #RCBvKXIP

23:20 IST The RCB are getting back into the game and the credit goes to ABD. His powerful back-to-back sixes has turned the hopes of fans alive.

Back to back humongous sixes by @ABdeVilliers17 and the great man seals the match with those two shots. No trouble in picking Mujeeb whatsoever for him.
That gonna make crowd go bonkers. #RCBvKXIP

23:12 IST While RCB batsmen are fighting hard to pull their first victory in the tournament, the fans are questioning the selection Sarfaraz Khan in the squad. The youngster is known for his power hitting skills but today he was dismissed for a golden duck.

23:05 IST The RCB need 56 runs off 36 balls. Last six overs, ABD at the crease and the fans have kept their fingers crossed.

22:52 IST For those who are watching the live streaming of this game on Hotstar. Did you notice something while Virat was batting? If not then don’t worry. We have something to show you!

22:50 IST De Villiers and De Kock are punishing the Punjab bowlers. Meanwhile, ABD has hit the 150th six for RCB. But the road is victory yet uncovered. Who will win today, RCB or KXIP??

22:41 IST The fans have given their verdict. They believe RCB will and so does someone else who is very popular in his country….

22:25 IST They bowled really well but what happened when they came to bat? The top two power hitters are back to the dressing room while two South Africans have taken the onus of the game. All the eyeballs on AB de Villiers now

Time to time @ABdeVilliers17 shows you why he is the best. No matter what the situation is this guy always shows a great character. #RCBvKXIP #IPL2018

22:05 IST Once again Virat Kohli bamboozled by a youngster. In the last game, it was Mumbai Indians’ Mayank Markande and today it was 17-year-old Mujeeb Ur Rahman. Indeed a new mystery spinner has evolved in this tournament.

After getting @henrygayle twice at #CWCQ, Afghanistan’s Mujeeb Ur Rahman has added @imVkohli to his victims list!

21:55 IST Well, if KXIP has Preity, RCB today has the blessings of their Bhabhi. When both the divas meet, people go crazy on the social media.

21:44 IST Amazing show by the RCB bowlers. KXIP bundled up within just 155 runs and thus, became the first team to get all-out in this season. Kohli & Co. need 156 runs to win. Innings break.

21:38 IST Meanwhile, the RCB fans has a special request for their skipper. They are urging Virat Kohli to win this season for Bhabhi at least. You have to believe, Anushka’s lucky charm is really working for the RCB. Ashwin also departs and KXIP in grave trouble.

21:24 IST A bad for Punjab at Chinnaswamy. The local crowd and the RCB supporters are happy like anything while the fans donning the red jersey need a reason to rejoice. All hopes on skipper R Ashwin now.

7 down if ashwin is gone game over #RCBvKXIP

21:15 IST The KXIP fans are not at all happy. Their expectations surely have increased after Punjab’s previous game and today, it’s happening all opposite.

No explanation could be there for this #RCBvKXIP

20:55 IST Look who is in the house. It’s Anushka Sharma cheering for the RCB. I hope you have now understood what has happened to the home team today!

20:41 IST The social media is buzzing because of only one man, Umesh Yadav. His new hairstyle has done the thing for the Indian speedster. Everybody around is stunned and amazed and so is the RCB skipper. Yes,,, we have the proof…

20:35 IST The fans have already declared Umesh Yadav a ‘Warrior’. He came, bowled and just ripped the KXIP batting top-order apart. He can do anything!

20:29 IST Post a terrific start from the KXIP, their top-order returned to the dressing room in just a single over. It was never expected from them after their performance in their previous game. Something is not good with the guests right now

20:23 IST Seems like Yadav is drawing power from his exotic pony! Takes the third wicket in a single over and the fans are going gaga over his bowling. What a bowling man. He looks a completely different bowler in the RCB camp.

Umesh yadav might get an election ticket in this assembly election after that over.. #RCBvKXIP

20:19 IST Just like his hairstyle Umesh Yadav is looking dangerous tonight. He struck two wickets in two balls in his second over. The RCB fans are erupting in joy! What a start of the game.

20:10 IST The RCB tried to start it from the scratch but KXIP openers have something else in their minds. This game in Bangalore is serving us with surprises right from the beginning. The first one was this… 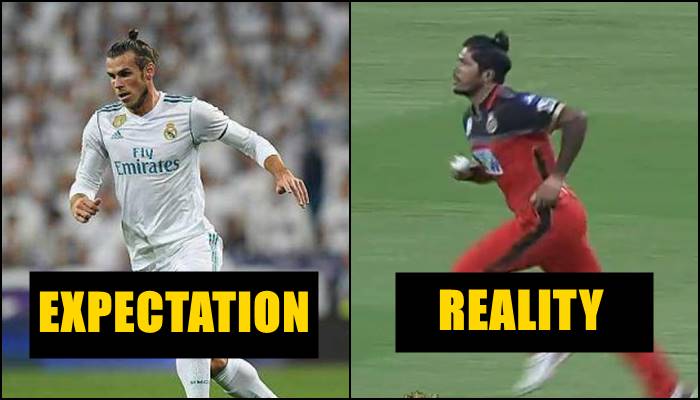 19:35 IST It’s a packed house tonight at the stadium and they cheering loud as Virat Kohli has won the toss and invited KXIP to bat first. Here are the playing XI of both the sides

19:16 IST The fans are excited and so are we. And here’s how the stadium Chinnaswamy welcomed the Challengers and the Kings for tonight’s game.

19:10 IST And the Kings have arrived at the venue. And look, who is entering the arena, the Universe Boss himself.

19:05 IST It’s going to be a big game at the Chinnaswamy tonight. Virat Kohli, Ab de Villiers, KL Rahul, Yuvraj Singh, Brendon McCullum, all going to talk with their bats tonight. Whose bat will be the loudest, just wait and watch.