Finally, after more than week’s time, the Mumbai Indians pulled out a terrific victory against the Royal Challengers Bangalore (RCB) on April 17. Though the game began with MI losing two back-to-back wickets in the first two balls of the match. However, skipper Rohit Sharma and Evin Lewis soon turned the plot of the game. Though Sharma missed his 2nd IPL ton by just 6 runs, he spoke with his willow at the moment when his team needed it the most. Some fireworks from these batters followed by Hardik Pandya’s fiery shots, MI put 217 on the board.

In return, RCB fell short by 46 runs and lost their third game in this tournament. Virat Kohli turned out to be the lone warrior who carried his bat and score a magnificent 92 off 62. He lacked a solid support right from the beginning which cost his team to lose another encounter in this season.

Here are the highlights of the MI vs RCB match held at the Wankhede Stadium.

23:45 IST And Mumbai Indians are back in the tournament. After losing three games in the trot, they beat RCB by 46 runs tonight and earned first 2 points in this season. Hard luck RCB. Despite carrying the bat, Kohli couldn’t take his team to victory!

23:20 IST Virat Kohli is the lone warrior tonight. He has the momentum of scoring runs but lacking a support from the other end. At the same time, he can’t take the risk of losing his wicket but he has no other option as well. What a pathetic situation for him.

23:10 IST This shouldn’t have happened. MI wicketkeeper Ishan Kishan gets hit by the ball and that too near his eye. After a few moments of medical attention, he goes off the field and has been replaced by Aditya Tare. Fans suggest he should have worn that helmet because God Sachin Tendulkar had said so in his viral video.

22:05 IST Wickets are falling from one end while Virat is standing strong at the other. Meanwhile, the RCB fans are most nervous! All eyes and hopes on the skipper!

22:51 IST Meanwhile there is a happening news for the Virat Kohli and RCB fans. Your Captain Fearless has now become the leading run scorer in the IPL. He needed just 32 runs and now, with 4559 runs, he is leading the table and has surpassed Suresh Raina.

22:45 IST The hopes of RCB fans are alive until Virat is leading from the front. He is at the crease and has anchored the innings

22:31 IST After lost of fireworks from De Kock and Kohli, Mitchell McClenaghan has got the breakthrough. After De Kock, he removes AB de Villiers too. RCB is on the backfoot while MI is back in the game.

WICKETS! Two in an over for Mitch McClenaghan! After bowling Quinton de Kock for 19, he has AB de Villiers caught for just one. #RCB 44-2 but Virat Kohli is still there.

22:15 IST And that’s the start RCB actually needed. Virat hasn’t forgotten that cost his bowler paid after Hardik Pandya wasn’t given out. He is here to take the revenge for sure.

22:00 IST So this is happening for the first time in this season. In order to chase a huge target, here comes captain Kohli to open the innings along with De Kock. What else a true RCB fan need?

21:35 IST Sharma Ji’s son is just tearing apart the RCB bowling as he is dealing in sixes and fours.

21:20 IST The way it all started, it lasts no more. Earlier it was Evin Lewis and now it’s Rohit Sharma who is taking the MI total towards 200. RCB fans are left heartbroken.

21:10 IST For those who are sitting at home and enjoying the game on television, we bring you something which will refresh your mood. The IPL theme music composer has been recently found on the streets of India. have a look:

20:59 IST The dismissal of Evin Lewis has certainly brought happiness in the RCB dug out. On the other hand, the fans on social media are going gaga over it.

20:37 IST After the first over, the RCB fans surely have thought that it’s going to be their ball game. But Evin Lewis and Rohit Sharma anchoring the innings perfectly.

20:20 IST After Umesh Yadav created a typhoon in the first over, all hopes lie on skipper Rohit Sharma’s shoulder. The MI fans are watching this game with their fingers crossed. 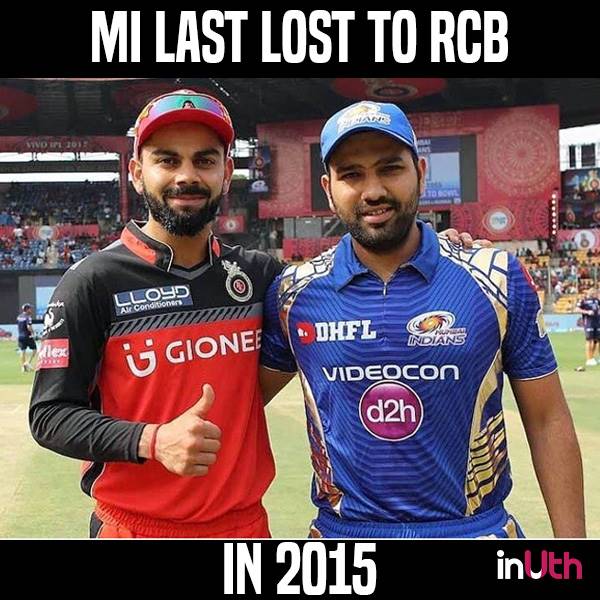 20:10 IST What a start! Two balls, two wickets. Umesh Yadav on fire… We punted it would be a hattrick, but not to be…

19:30 IST Virat Kohli has won the toss again and, as always, has opted to chase. The Mumbai Indians will ball first again.

19:25 IST Now let’s talk about the MI fans. They are so many in numbers but haven’t found a reason to be happy in this season. Ahead of the next game, they would surely be WORRIED!

19:10 IST After 3 consecutive losses, the MI side needed a boost. And look, who arrived at the net sessions to do the much-needed job!

We had a special visitor at our training session last evening @sachin_rt kept a close eye on the proceedings and interacted with the boys ahead of #MIvRCB #CricketMeriJaan #MumbaiIndians pic.twitter.com/RHQqUiLNx0

19:05 IST Mumbai has lost all the previous 2 games at Wankhede. Despite an extraordinary batting performance, they were defeated in the last match. But that was the past and today, MI are hopeful for their first win.