For the first time in the history of the Indian Premier League (IPL), the Sunrisers Hyderabad (SRH) have won a match at the Eden Gardens, Kolkata. Firstly they dominated while bowling in the first innings and later, with the bat while chasing a target of 139 runs against the Kolkata Knight Riders (KKR). Dinesh Karthik & Co lost the 2nd consecutive game in this season so far while the Orange Army have retained their top spot on the points table. The KKR fans must be highly disappointed after the team management made severe changes in the batting line-up which ultimately failed to create an impact. The debuts of U-19 stars – Shubman Gill and Shivam Mavi somewhere got overshadowed by this defeat. However, they still have a long way to go.

On the other hand, David Warner is probably the happiest person right now as the team has been doing a great job in his absence. With three wins, they lead the tournament with 6 points.

In case you missed the live action, scroll down and get the highlights:

00:20 IST And it’s over for KKR. They lost 2nd game in a row, this time by 5 wickets. SRH retains theor top position on the points table.

00:17 IST The game is heading towards a thriller finish. Skipper Kane Williamson has returned to the dressing room and 5 wickets are down. SRH need 20 runs off 14 balls. While the SRH fans are nervous, KKR followers have a sigh of relief!

00:03 IST Goodmorning guys. It’s a new day. This game started on Saturday but thanks to rain that we are still waiting for this game to finish. The former KKR player- Manish Pandey and Shakib have caused enough daage to their previous team and the fans are like…

23:56 IST Meanwhile Shakib Al Hasan completes 4000 T20 runs in his cricketing career. Right now he is putting all his efforts to take his team closer to victory along with his captain.

23:41 IST The KKR spinners are bamboozling the SRH batsman. Earlier it was Narine and now it’s Kuldeep Yadav. These two have suddenly the turned the game and have made it interesting. Will it be another nail-biting affair?

@KKRiders you are giving us hope to continuing the unbeaten run at Eden Gardens against @SunRisers
12 overs of quality spin and one of them @SunilPNarine74 !!
Kolkatans are hoping high!!!#KKRvSRH #IPL2018 #VIVOIPL #VIVOPerfectFan #PerfectFan @Vivo_India @StarSportsIndia pic.twitter.com/Z9xad6qk4U

23:26 IST And suddenly the home team seems like making a comeback in the game. The spinners are doing a great job tonight. Especially, Sunil Narine who has just turn the hopes of KKR fans alive by removing the SRH opening pair.

Narine Spinning The Web ! Gets The Orange Cap Holder! Here We Go! We Are Into This Now! #PlayUnited @KKRiders #KKRvSRH

23:01 IST SRH begin the chase and as always, their opening pair is as solid as their fielding and bowling. Especially Wriddhiman Saha who hasn’t disappointed the skipper and SRH’s fans after his promotion as an opener.

22:31 IST While Dinesh Karthik is getting trolled for the team management tonight, SRH skipper is gaining all the praise for his superb captaincy. What a perfect way to lead a pack away from home.

Why to watch a clown juggle when you have #KaneWilliamson juggling his bowlers better than any one..
Superb captaincy by him…#SRHvsKKR #IPL2018 #OrangeArmy @StarSportsIndia @IPL

22:19 IST Gill is gone and KKR fans are unable to understand what is happening at the Eden right now. They are angrily demanding Karthik’s removal as captain.

22:02 IST After watching the downfall of KKR’s top-order, the nation asks, where is Shubhman Gill? The U19 world cup hero has been inducted into the team for the first time. 4 wickets down and KKR haven’t sent him to bat.

21:56 IST The SRH cricketers are pushing up their limits. Be it skipper Kane Williamson or his boys, everyone is just performing more than 1oo percent. Meanwhile, they are realising that they can fly too!

This is the second best catch of Kane Williamson in #IPL2018
First, obviously the Captaincy of #SRH#KKRvSRH pic.twitter.com/5O36W935Bf

21:51 IST The home team is struggling at this point. Top three batsmen are back to the pavilion and fans are regretting Sunil Narine’s dismissal.

Waste Of Sunil Narine… Make Him Play In Powerplays…#KKRvSRH

21:35 IST The game has resumed and SRH bowling attack has already taken the toll over KKR. The Orange Army have never won a game at the Eden Gardens but with this bowling attack, they look dangerous tonight.

21:15 IST Good news for the cricket fanatics out there. The rain in Kolkata has stopped s of now and the umpires on the field to check the conditions. The match will resume at 21:30 IST

Covers are coming off and there will be no loss of overs!!!!#KKRVSRH #IPL2018 #KKRHaiTaiyaar pic.twitter.com/xs8aJyknNX

20:35 IST What The Hell! The game had just started getting excited and here comes the Rain God in Kolkata. The covers are on and the match halted! Fans now have to wait for a while. 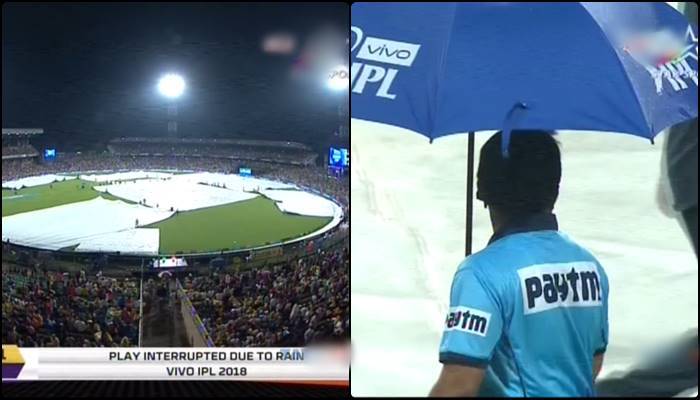 KKR vs SRH match stopped due to rain

20:20 IST The ‘Lynsanity’ is taking over the Eden gradually. It’s a packed house at the Edens and every KKR fan is enjoying the fireworks.

Expensive over as Lynn finishes the over with another boundary along the long-off. Has he found the cure to knuckle balls of #Kaul#KKRvSRH #IPL2018

20:12 IST After a decent start, KKR loses the first scalp. Once again the umpire couldn’t listen the sound of the ball taking the edge and have to reverse his decision after DRS. How long will this continue?

19:50 IST Well, finally the wait is over for debutants Shubhman Gill and Shivam Mavi. They became the joint first India U-19 players to play in this season. Congratulations to the world cup heroes.

We have Shubman Gill & Shivam Mavi making their debut & Mitchell Johnson coming back into the side for Tom Curran! #KKRVSRH #IPL2018 #KKRHaiTaiyaar pic.twitter.com/lMmeexykAu

19:40 IST A few minutes to go to the match number 10 of the IPL 2018. SRH has won the toss and they will chase for the third consecutive time.

19:25 IST While both the teams are busy in their last moment preparations, a fan has come up with an amazing fact. What a research!

19:17 IST Will it be a night of joy for the Knights in the city of joy? Well, the fans wish so. With fingers crossed, every KKR follower wishes for a strong comeback.

Less then 1 hour to go for #KKRvSRH to commence at Eden Gardens! Are you ready? #KKRHaiTaiyaar #KKR #KorboLorboJeetbo #IPL2018 pic.twitter.com/MkbXNBEu1k

19:10 IST With 40 minutes to the match and both the skippers are set to take the field. Ahead of the game, the KKR had to suffer a huge setback after India U-19 World Cup winner Kamlesh Nagarkoti was ruled out of the tournament due to a foot injury. Though he didn’t feature in the last two games, his absence might be felt in the upcoming games.