IPL 2018 second game between Kolkata Knight Riders and Royal Challengers Banglaore at the Eden Gardens on April 8 might get canceled due to rain.

Light to moderate rain and thundershowers are expected in the city as the cricketers and fans will have their fingers crossed for the marquee IPL clash. 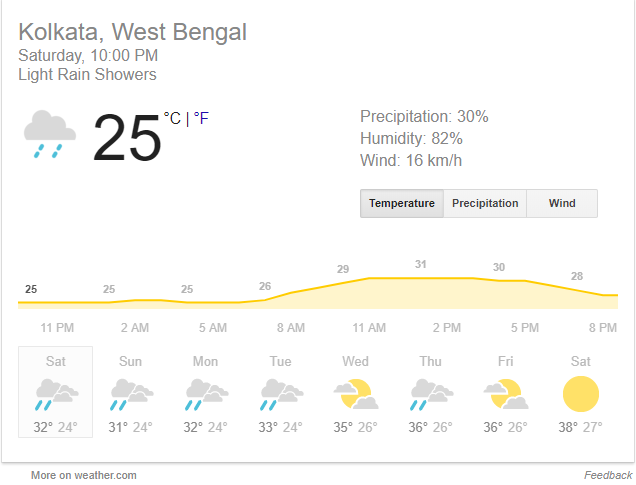 Earlier, on the eve of the game, practice of both teams were cut short due to rain.

Lead by example _
Be aggressive as always _
And bowl as fast as possible _#KKRHaiTaiyaar #IPL2018 #JohnsonHaiTaiyaar pic.twitter.com/co4cIvcknl

“By the time I came, they had covered the wicket so I could not see the wicket. We haven’t thought about the toss, will decide it tomorrow,” KKR captain Dinesh Karthik said at the pre-match conference.

Thrills and Drills_
_ from an intense training session as we move closer to our #IPL2018 opener.
Visit https://t.co/W55C45Ue4d for more images#KKRHaiTaiyaar #KKRvRCB pic.twitter.com/O6IwOZzBUp

Kohli hit the nets straightaway after taking the field and batted for close to 30 minutes before light drizzle halted proceedings.

This will be all of us tomorrow when we’re watching with friends and the Bold boys hit them out of the park! #PlayBold pic.twitter.com/0b0iV98LE6

KKR followed RCB but just as they were warming up, rain cut short their rehearsal.

Dashing Australian opener Chris Lynn and West Indian all-rounder Andre Russell were at the nets for the hosts.

Kohli and Co. finished at the bottom of the pile last time and since the start of the IPL have come close to laying their hands on the elusive trophy thrice — in 2009, 2011 and 2016.

KKR, on the other hand, lifted the trophy in 2012 and repeated the feat by beating Chennai Super Kings in 2014.

The Knight Riders also hold the record for the longest winning streak by any Indian team in T20s.