The Delhi Daredevils (DD) fans were pretty confident on their team’s victory as skipper Gautam Gambhir was at his previous home ground and owned a record of scoring most IPL runs at this venue. However, Kolkata Knight Riders (KKR) once again turned the game upside down. Despite a poor start and a last over tumble, they managed to put a score of 200 on the board. Thanks to Andre Russel and Nitish Rana who played fearlessly and ruined the economy rates of the DD bowlers. In the second innings, it was the KKR bowling attack which frustrated the guests, forcing them to lose the game by 71 runs.

With this victory, KKR rises to the second spot on the points table while DD slipped to the 7th with only 2 points.

Here are the highlights of KKR vs DD game played at the Eden Gardens, Kolkata:

23:15 IST The hopes of DD fans are shattering with each falling wicket, KKR now just need one more scalp to win the second game un this tournament.

1. Other bowlers when they take wicket
2. #narine when he takes wicket#KKRvDD
pic.twitter.com/neYgE8G7hz

23:08 IST Just wanted to let you know that the DD batting line-up is falling like a house of cards. The lower batting-order are not in a mood to spend a good time at the crease.

23:02 IST Until Maxwell was at the crease, DD fans had their hopes alive. Unfortunately, Kuldeep broke that too. Maxwell goes back to the dressing room and DD need 87 runs to win.

Maxwell goes. Kuldeep gets the redemption. Maxwell tries to get another one. @DelhiDaredevils are 6 down. #KKRvDD #KKRHaiTaiyaar

22:50 IST Maxwell and Pant had just got the moment and Kuldeep Yadav breaks the partnership. The DD dugout is full of cricketers with ‘Gambhir’ faces.

22:40 IST Delhi’s situation is getting better with Rishabh Pant and Glenn Maxwell’s knock. The DD fans may hope for a victory only if this pair keep on batting in the same way.

22:20 IST In the last game he got just an over but today, he was brought into the attack early and he removed Gautam Gambhir. That’s U-19 wonder speedster Shivam Mavi for you. What a start of the season for the youngster.

22:05 IST Gautam Gambhir at the Eden track after a year. An emotional moment for the Kolkata people.

21:45 IST Despite a slow start and a horrific last over, KKR managed to set a target of 201 for DD. Innings Break.

21:35 IST As we said, no one just can’t ignore GG tonight. The Delhi skipper takes a good catch to get the wicket of dangerous Nitish Rana. Gret effort captain.

on the whole astonishing manner to dole out with flatter this moment! #KKRVDD! nobody be capable of beat the excitement! #ShareACoke pic.twitter.com/bbzoYpw5TE

21:28 IST Trouble for KKR again. At one point they looked extra-confident but now, 200 seems difficult as Russel has lost his wicket. A sigh of relief for the bowlers

21:15 IST So, 200? Or shall we revise it? Listen, folks, if Russell gets out cheaply, 170 would be difficult. Just sit back and enjoy… Back to back sixes by Russell. Gambhir would be iffy… biting nails? Roy drops Russ in the meanwhile…

Back to back sixes by Russell after being dropped. Jason Roy right now.. #KKRvDD pic.twitter.com/nqTTo4KRUt

21:08 DK is OUT. He was trying to get three fours in a row, he hit the first two, and he was third time UNLUCKY. Fans still seem to be gheraoing Gambhir on Twitter. Over to Russell…

something be the last outcomes folks, the two towns should at some point or another put their disparities aside and #ShareACoke! #KKRVDD pic.twitter.com/8yKswhpUgJ

Just what we all fell for…

And just when I was typing “Captain looks in good touch tonight” to tweet, he gets out playing the same shot. #KKRvDD

21:04 IST Somebody is dreaming or is he? Need of the hour= Russell Muscle!

21:00 IST DK gets a lifeline after he was given out, he goes for the review and retains it. Big moment in the match. We are still waiting to get the first glimpse of SRK. Well, Tollywood actor Prasenjit is in the house. Only if…

20:45 IST The Delhi boys are not losing the grip on the game while the fans are still in the awe of Gambhir playing at the Edens. A point to be noted – DD’s present captain used to play for KKR and the vice-versa.

20:35 IST The Delhi boys are setting the Edens on fire with their bowling performance. They are simply amazing and so is their social media handle. They are enjoying every bit of the game with their followers.

20:25 IST While the battle is between Gambhir and Karthik, there are some true KKR fans who are remembering one of the legendary batsmen of this team. Though he has retired, his voice is still making IPL entertaining!

Missing Old Days and this legend

20:17 IST Meanwhile, we came across an interesting fact about the Delhi skipper. gautam Gambhir holds the record of scoring most runs in this tournament without hitting even a single century. 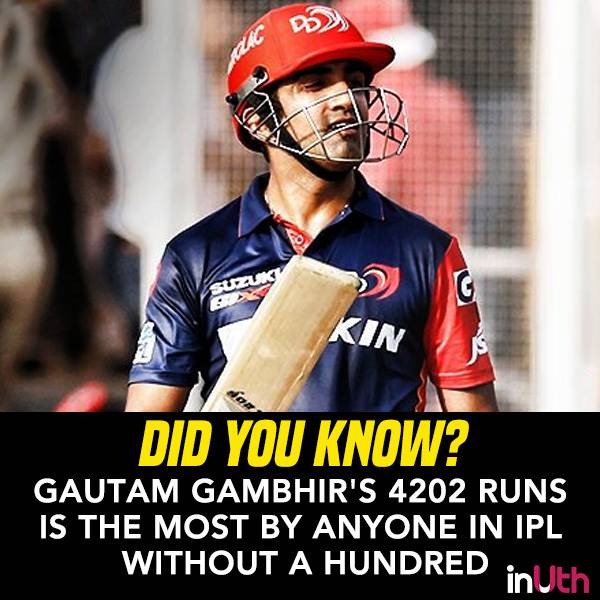 Some ‘Gambhir’ Stats About Gautam

20:12 IST The Delhi boys looking as furious as a lightning bolt. Till the KKR openers understood what’s happening, Boult struck and drew the first blood. Sunil Narine goes for 1 and there is an awkward silence at the Eden.

20:05 IST Trent Boult started Delhi’s bowling attack and guess what, he started off with a maiden over. What an over delivered by the Kiwi speedster.

19:45 IST KKR’s past and present in a single pic. It’s going to be a superb game tonight at the Edens with a packed house.

19:30 IST What a comeback Gauti. Wins toss on his 50th IPL outing at the Edens and choose to chase.

#DD Captain @GautamGambhir calls it right at the toss and elects to bowl first against #KKR at the Eden Gardens#KKRvDD #VIVOIPL pic.twitter.com/bvTLlVWjHv

Here is the playing XI of both the sides

19:20 IST The fans are excited and so are we. The teams have arrived at the Eden for an epic clash tonight.

It’s time for Match 13 of #VIVOIPL as the two teams make their way to the Eden Gardens.#KKRvDD pic.twitter.com/A702APEwOi

19:15 IST Neither the fans nor the KKR franchise has forgotten their most successful skipper. Here’s how Venky Mysore, KKR CEO, welcomes their ex-captain

19:10 IST As we expected, the man himself has expressed it in his own words. Gambhir is feeling homely right after landing at the Kolkata airport.

19:05 IST Kolkata based Gautam Gambhir fans are extremely happy on his arrival in the city of joy. It’s going to be interesting to watch him play for another team after 8 long years. It’s going to be 50th IPL outing at the Edens tonight.