The Royal Challengers Bangalore (RCB) tried their best to defend the score of 127 which they somehow managed to put on the scoreboard. But MS Dhoni had some other plans. Just like their previous encounter in Bangalore, Dhoni yet again took the charge at the end and sailed his team to a magnificent victory by 6 wickets. Another loss for Kohli and his men in this tournament and their tough time starts as they need to win all the leftover games in order to enter into the knock out rounds. Unfortunately, Parthiv Patel’s maiden 50 fifty in this season went in vain as the CSK batsmen successfully chased down the target and retained the top position on the points table.

In case you missed the game, scroll down and relive the game:

19:15 IST The game has slowed down a bit. Looks like Bravo and Dhoni are having some trouble to play big shots. But the fans haven’t lost the hope of winning this game as Dhoni is still at the crease.

19:05 IST The CSK fans haven’t expected that Dhoni and Bravo will play at a slow rate. Whatever be the reason, the fans are not liking it. They expected some fiery knocks but it’s turning out to be a Test match.

So th strategy is plain simple.
Test match till 18th over and then finishes in his style. #Dhoni #whistlepodu #CSKvRCB #Yellove #IPL2018

18:55 IST CSK are 4 wickets down while this game is turning to be another nail-biter affair. With Dhoni and Bravo at the crease, victory looks easy for Chennai but will RCB bowlers be able to restrict them?

#CSKvsRCB Parthiv Drops Bravo! It should have been 5 down, two finisher at the crease right now for CSk, MS Dhoni who is in form of his life will definitely want to finish this game in style. #CSK 85/4, 46 needed of 42 balls. #WhistlePodu #PlayBold #CSKvRCB #IPL2018

18:45 IST Man in form, Ambati Rayudu also joins Raina and Watson in the dressing room and Dhoni takes the driver seat. On the other hand, spinner Murugan Ashwin is bamboozling the CSK skipper.

18:20 IST No hopes left for the RCB fans. Rayudud and Raina are batting fearlessly and have taken the team total above 50 in just 7 overs. RCB bowlers have no clue what to do rather than hurting the fans.

18:10 IST Despite losing Watto, the CSK dugout is not worried because Ambati Rayudu is still at the crease, accompanied by Suresh Raina, who is dealing in boundaries.

Powerplay done and CSK are off to a steady start in the run chase
Rayudu looking in good touch once againhttps://t.co/Z1mzgwFTWa#CSKvRCB#IPL2018 pic.twitter.com/B7OamBKix0

17:55 IST The CSK begins the chase while RCB bowlers deliver some tight overs. After Southee conceded 9 runs in his first over, Chhal bowls a maiden over and then Umesh Yadav superbly bowls Shane Watson out. Still, they have a long way to go with a low score which looks impossible to defend.

17:45 IST Another disgusting situation for the RCB. Except for Parthiv and Southee, no other batsman could score in double digit. An easy target for a team like RCB to chase.

17:30 IST Southee is up to something monstrous. While the top order failed terribly, the Kiwi speedster is playing some cracking shots to score as many runs as possible on the scoreboard.

SIX! Tim Southee slams 3rd Six of the #RCB innings in the 19th over pic.twitter.com/s5q6VDF7KU

17:25 IST Thanks to Tim Southee who too the team total beyond 100 runs. Meanwhile, he also became the 2nd RCB batsman to score in double digits today. Meanwhile, the RCB fans are yet to understand what has happened to them in today’s game.

17:15 IST While the RCB batting line has fallen pathetically, time to have a look at the scorecard. Apart from Parthiv Patel, no batsmen have scored in double digits yet! 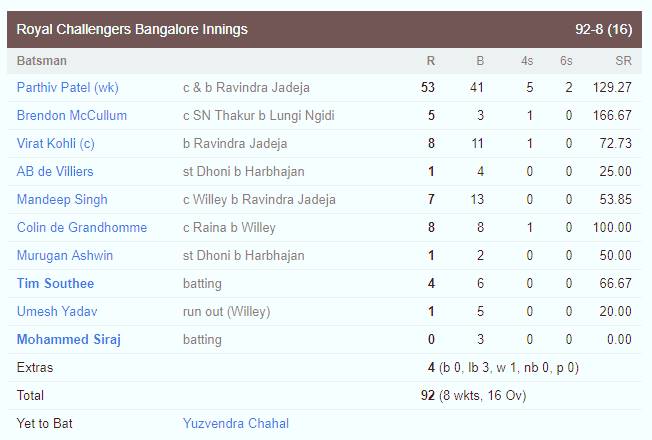 17:07 IST Is RCB rooting for another lowest score in IPL? It seems so. 88 runs on the board and 7 men have already returned to the dressing room. See what the cricket fans have to say.

16:58 IST He lost two back-to-back catches and was trolled badly after that. In this game, he took three wickets and didn’t celebrate any of them. That’s Ravindra Jadeja for you guys!

16:53 IST While RCB is losing wickets at regular intervals at one end, Parthiv is continuing his masterclass batting. Smashes a magnificent fifty in his first match of this season.

16:40 IST  McCullum, Virat Kohli, AB de Villiers, all gone within 7 overs. Yes, this is the current scenario of RCB after batting first. However, Parthiv is still standing strong and inching towards his first fifty in this season.

Big guns lopped off cheaply, RCB being kept alive by Parthiv Patel. Who would have anticipated such a turn of events?

16:30 IST Another blow to RCB. This time Virat Kohli departs and Ravindra Jadeja removes him. But the bowler doesn’t seem happy on his success. On the other hand, Parthiv is going ahead strongly. 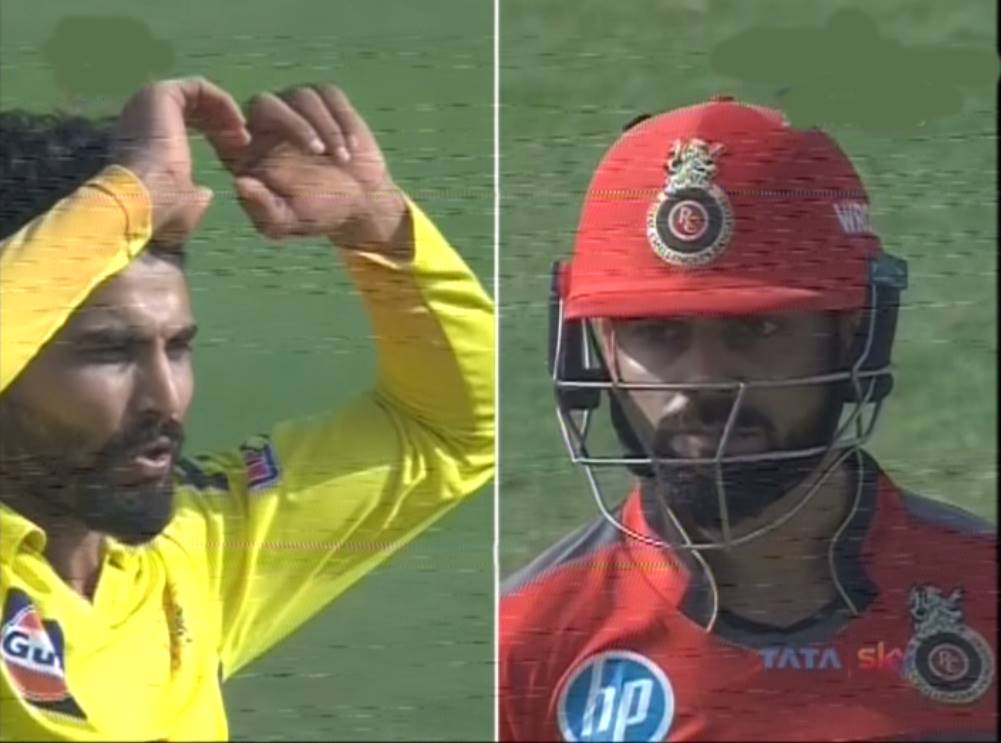 16:20 IST While RCB is off to a steady start, the fans on social media are hailing Dhoni for his faith on Sir Ravindra Jadeja. Getting another chance after dropping two catches, it’s rarely possible. Lucky Jaddu though.

One should be lucky enough to have a MS Dhoni figure to trust and back,
in every jadeja moments of life #CSKvRCB

16:10 IST Oh Baz (Brendon McCullum), what kind of shot you just played. Just gave away the wicket to Lungi Ngidi so easily. An early blow to RCB and captain Kohli steps in. Here’s an amazing stat about Bangalore’s batting line-up.

16:00 IST The play begins. Good to see Parthiv Patel opening the innings alongside Brendon McCullum after quite a long time. The ex-CSK opening pair doing the job for RCB today.

15:45 IST finally, the Englishman, David Willey, gets a chance in the CSK playing XI. With his inclusion, it’s expected that the might turn more lethal as a bowling unit!

15:30 IST Toss Time. MS Dhoni wins the toss and chooses to chase. That means, the RCB will bat first.

15:20 IST The scorching heat out there doesn’t bother the cricket fanatics and the same thing is happening in Pune right now.

15:10 IST It’s CSK at its den and the fans have started arriving at the MCA stadium in Pune to cheer for their lions.

15:05 IST It’s expected to see several changes in both the sides. In RCB, Quinton de Kock might miss the games due to personal reasons. Also, Ab de Villiers who has been out of the team for last games due to illness might get back to the playing XI.