Defending champions Mumbai Indians locking horns with Chennai Super Kings is the match of the most unfair clash. It can be said because CSK is in numero uno in the points table whereas MI is at the last spot. CSK has been in red-hot form winning 7 of their last 8 matches. For Mumbai Indians, Rohit Sharma who has not had the best of seasons will be expected to stand up and play a captain’s knock since he has just scored 140 runs in his six outings so far.

11:32 IST: Meanwhile, it seems the game is slipping from the hands of Chennai Super Kings. They are not used to losing this season, this will be a different feeling and a reality check. You can also see MS Dhoni walking up to his bowlers and advising them.

11:28 IST: Hardik has just hit a SIX, but still Delhi durr hai Mumbai ke liye. They need 22 of 12 balls. Sharmaji is still there championing the chase. He is the rockstar.

What power from Hardik in that six!

#CSKvMI #CSKvsMI #MIvCSK Lewis gone. Is there a twist in the tail?

11: 15 IST: 47 runs required off 5 overs. That’s the equation at the moment as MI seem to have things under control. Meanwhile, here is what the two camps have to say now…

11:10 IST: Lewis has been of the strike for something. Sharma should come good is what every Mumbaikar is praying for certainly. But remember, Bravo is there in the yellow.

Dwayne Bravo’s career bowling average in the final five overs of T20 innings is a solid 18.3 RPO but this season, his three wickets in that phase have come at 43.33. His economy-rate’s also jumped up to 10.8 RPO as opposed to 9.4 in his career.#IPL2018 #CSKvMI #SelectDugout

23:00 IST: Rohit Sharma gets started with a SIX. It was a pure genius to see him loft a pacer with such ease for a six. He can do anything and hence he is called the Hitman of cricket.

22:49 IST: Lewis has just changed gears and now the runs are coming, the advantage is they have wickets in the bank and they should get home comfortably.

22:38 IST: MI have made a base for themselves but I have a problem one of the two should start going after the bowling.

22:28 IST: God is present at the ground, will it help MIs? Even his presence in the dressing-room should help, that is the body of work he comes with. Oh, and his boyish smile that mets the heart!

22:20 IST: Finally the Mumbai Indians cheergirls have some exercise to do. All these days they were doing nothing, thanks to MI’s performance. End of batting PP, 50 up without loss. Meanwhile, Lewis has just played 10 balls. 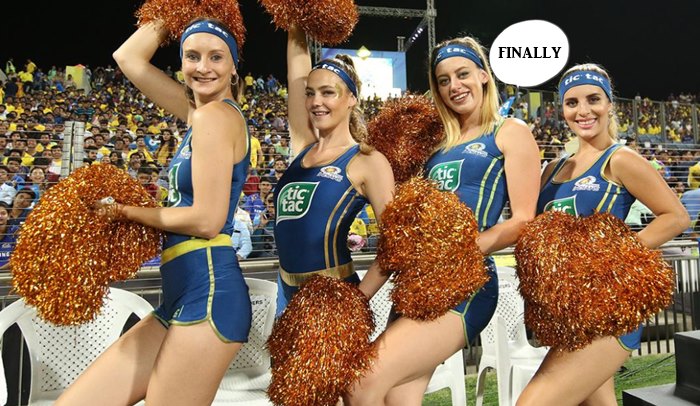 22:15 IST: Seems like the right way to go, have wickets in hand for the final onslaught, something KKR could not do the other night against Daredevils. Meanwhile, CSK fans be like…

22:10 IST: Lewis is again one of those khoobsurat dhokha’s, he gives you a lot of expectations but he has not really come good as yet. Surya seems to have got into his elements.

The traditional Suryakumar flick to get off the strike. #MI – 23/0, 2.5 overs#CricketMeriJaan #MumbaiIndians #CSKvMI

22:00 IST MI begins the chase. Surya Kumar Yadav and Evin Lewis open the innings and they are off to a good start. It’s up to the CSK bowlers now how soon they can put the Paltan under pressure.

20:30 IST: Ek baat batao itna mara CSK, phir bhi the score is 158. Cannot figure out where it went wrong for CSK. I swear you would have asked Rohit Sharma 170 at the toss, he would have accepted it gleefully. It is brilliant if they can keep it below 170.

Csk doesn’t have the bowling to defend this total! ___ #CSKvMI

21:20 IST: Meanwhile, Thala departs trying to fetch a wide full-toss. He is OUT and there is pin drop silence in the ground. Soon after MSD, Bravo departs for a golden duck. It is falling apart for CSK.

Not watching cricket. Dhoni is out on 26 and his fans are celebrating as if he scored a century. #CSKvMI pic.twitter.com/OtlkyWAc8e

21:15 IST: MSD seems like has set 170-180 as a par target and that means he switches on. He goes straight a SIX followed by a FOUR. MSD Power! It is like Dhoni thinks my strike rate is too low and in the next two balls makes up for it. Just Dhoni ways! Whistle Podu in Pune…

21:10 IST: With 6 overs to go, I really do not know what is the target in his mind. He must have assessed the pitch and knows exactly what is a par score, we will exactly know what it is by his approach in this over.

21:00 IST: Thala and China Thala at the crease this is picture perfect from CSK’s point of view. The notion is MSD has a problem with left arm slow spin, will we see more of Krunal? And by the way, where is Markande? MSD surely has the Rajinikant-like stature in Chennai and south…

20:50 IST: Remember folks Raina is due for a big one and he looks determined to make this his night to remember. Meanwhile, commentators curse hits Rayadu, he is OUT. The man in form is back in the hut. Can MI claw back?

20:40 IST: It is Rayadoooo time in Pune, the fans are loving him. will he take the China Thala title from Raina, just kidding.  We all love Raina and such comparisons are unfair.

20:35 IST: It is quite funny a fan feels because Pollard is out of form when he met Bravo he said papa bohot gussa hai. Does that make sense to you? It doesn’t to me! Check the pic…

20:30 IST: Watto seems to be having wife syndrome, his wife was present and he got out early. Meanwhile, Mr. IPL Suresh Raina opens his account with a SIX… Naam ka laaj rakh liya Sonu bhai. Also, I am guessing Suresh Raina is china Thala because he is MSD’d deputy… Is it true?

20:15 IST: Cannot understand that Ads are happening during IPL or IPL happening during ads. So many ads, cricket is no more the way it used to be… Meanwhile, CSK is finding it hard to cut loose, the problem is we are so used to seeing them deal in sixes, that even run a ball seems slow.

20:00 IST: We are all-set both the teams have made way to the park. It will be MS Dhoni vs Rohit Sharma. Shane Watson and Ambati Rayadu make way to take the first strike for CSK. We will soon see how the pitch plays. Rayadu starts from where he left the other night, SIX to start!

19:40 IST: Rohit Sharma darr gaya, surely MS Dhoni se darr gaya aur isiliye he opted to bowl first. So CSK will bat first. The wave seems to be favouring the yellow brigade, and why not!!!

all matches #csk one lion will hurt other teams sick suddenly lets think #csk all lions will attack today they will dead #cskvmi pic.twitter.com/eLHbQLo0Ve

Meanwhile, CSK fans would treat their MI counterparts like this.

#CSKvMI
Today #MI ‘s condition against #CSK will be like ___ pic.twitter.com/XjB5huvDpo

Here is the predicted XI: