The ongoing Indian Premier League (IPL) season 2018 witnessed three security breaches so far. And all of them happened during the games that involved Chennai Super Kings (CSK).

On all the occasions, enthusiastic fans managed to evade security cover just to touch their favourite player MS Dhoni’s feet.

Dhoni, who is donning the yellow jersey after two years, is like a demigod for his fans. Dhoni’s following has increased manyfold since he led the Indian Cricket Team to lift the World Cup in 2011, after a wait of 23 years.

On April 20, 2018
During the IPL 2018 game between Chennai and Rajasthan Royals (RR), an ardent Dhoni fan managed to break the security cover and ran inside the playing area to touch Dhoni’s feet. This happened when the match was still going on.

On May 3, 2018
Again, an enthusiastic fan managed to evade security and ran towards the CSK’s dugout area inside the stadium to touch Dhoni’s feet. The incident happened when Dhoni was getting ready to bat during a game between Kolkata and Chennai at the Eden Gardens.

On May 5, 2018
As soon as Dhoni finished the game against Bangalore by hitting three sixes off Yuzvendra Chahal, a young kid from the stands ran towards Dhoni and touched his feet before security personnel took him off the field.

As @ChennaiIPL climb to the top of the #VIVOIPL points table, yet another fan rushes to meet his idol @msdhoni. #CSKvRCB #VIVOIPL pic.twitter.com/p14RVjGFs9

Not in just this IPL season, we have witnessed such security breaches during IPL 2017 season as well. In the Match Number 50 of the IPL 2017 between Gujarat Lions (GL) and Delhi Daredevils (DD), a man in an orange tee with ‘Raina 03’ written on its back, entered the field to get an autograph from Suresh Raina. 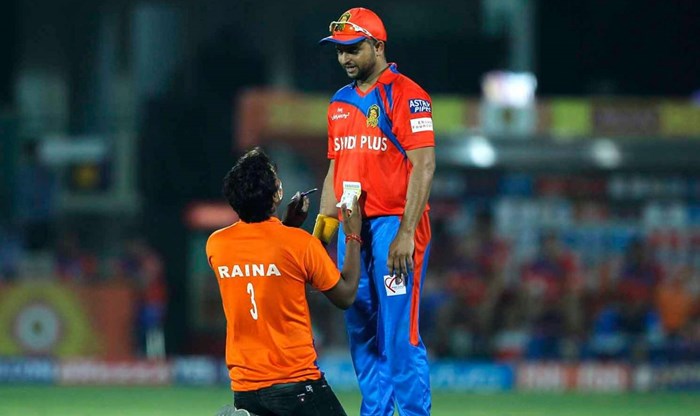 Besides, there are many instances in the history of this game when people jumped the boundary line and rushed towards the centre of the field to celebrate either their team’s victory or to meet their idol.

With an increase in such security oversights during the matches, security agencies should take some serious note and lay out a plan to avoid such on-field incidents as this is a threat to the players. One cannot predict with which intention a spectator is breaching the security cover.