The fourth Test between India and England will begin at Mumbai’s Wankhede Stadium on Thursday. The hosts have taken an unassailable 2-0 lead in the five-match series and would aim to make it 3-0 with the final match scheduled to be held in Chennai on December 16. Since the third Test in Mohali, there had been endless discussions on the team composition for the fourth Test, especially the opening slot.

According to an opinion poll conducted on Facebook, around 93 per cent pollsters backed Murali Vijay and Parthiv Patel to open the innings for India. Vijay was an obvious choice for India’s opening slot despite a spate of low scores, whereas the users backed Patel for his batting exploits in the opening slot. Surprisingly, KL Rahul who has been in prime form in all formats, got the least votes due to injury.

If reports are to be believed, KL Rahul is set to open the innings along with Murali Vijay on Thursday. Also, with Wriddhiman Saha unable to recover from a thigh strain, Parthiv Patel will also be playing as the wicket-keeper. Having made a comeback to the Indian squad after a long gap of eight years, Patel fared decently well with the bat. The 31-year-old southpaw played a match-winning knock of 67 not out as an opener in the second innings.

Poll results: Facebookers back Parthiv Patel to play in the 4th Test in place of Wriddhiman Saha 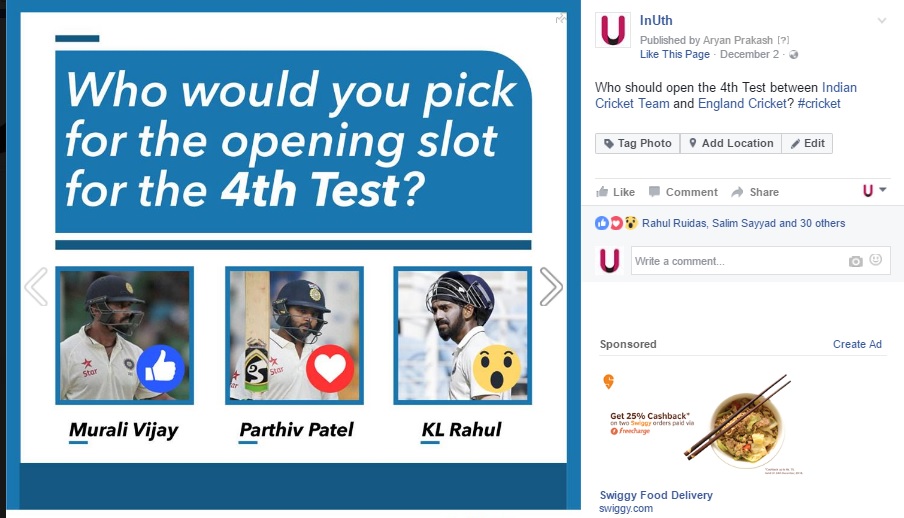 Following a century in the opening Test at Rajkot, Vijay struggled for runs in the next two Tests at Visakhapatnam and Mohali. However, the Facebook users still believe he can bounce back to form.

On the other hand, Rahul was ruled out of the third Test after sustaining a forearm injury while fielding in the second Test at Vizag.