We live in a cricket-crazy nation, where cricketers are worshipped, literally! Be it the streets or the stadium, under-lights or without it, cricket is ‘always’ happening. It is a game, that in a way unites the country that is so diverse in terms of culture, language and religion.

We have all seen the Indian One Day International (ODI) jersey which is blue in colour. But how many of us have taken a closer look at the jersey? Have you spotted the 3 stars on the jersey, just above the BCCI crest? If you have, you certainly have a hawk’s eye to have spotted it! But do you know what does it signify?

ALSO READ: Trevor Bayliss calls for scrapping of T20Is; Three reasons why he should chew back his words

First, a lesson about jerseys

The jerseys that players wear; be it cricket or any sport at any level, sportsman or athletes wear it with a lot of pride. For example, just want to draw your minds to the time when the Indian blues became a hot product for every cricket fan to own, because of the advert ‘Bleed Blue’. The tagline did strike a chord and hence it became extremely popular. Even fans wore it with a lot of pride as it exuded a feeling of pride and strength. Likewise, every cricketing nation and the colour on their jerseys represent something. For example, Pakistan’s cricket jersey is green in colour which signifies ‘abundance’, which also means the nation has an abundance of talent. Even West Indies, who don the colour maroon, which signifies dominance. And we all know how Windies dominated cricket during the times of Vivian Richards.

From Sunil Gavaskar to Virat Kohli with MS Dhoni sandwiched in between, without forgetting Sourav Ganguly, the India cricket odyssey has a golden history. Hence, to signify the evolution of Indian cricket BCCI came up with the idea to have three stars on the Indian jersey. The three stars stand for the three times the senior cricket team lifted the World Cup. That makes it three!

The three World Cup’s are 1983 when Kapil Dev’s India took the team to an improbable victory in England defeating a formidable West Indies. After that, we came close to lifting the crown in 2003, only to lose to eventual winners Australia in the finale. But stars shone again when MS Dhoni took a second-string India to be world champions at the inaugural World T20I in 2007. That made it two stars. Four years hence, MS Dhoni-led team India lifted the crown in India. That made it three! Six months after the 2011 win, when India played its first home series since the win, Nike came up with the 3-star in the jersey.

Here is what Kohli said after the three-star happened, he said, “I know there’s a billion-plus hope always riding on our team. That’s why I try to play with responsibility and with respect to the team’s needs. The pressure’s always on, so my focus has to be too.  I feel really proud – for me, the Three Stars on the jersey represents what the Indian team is today and how much they have achieved. I feel really honoured to be a part of a team that has won three World Cups.”

Since India has been waiting for the fourth star. Indian fans would dearly hope that they make it four by 2019. 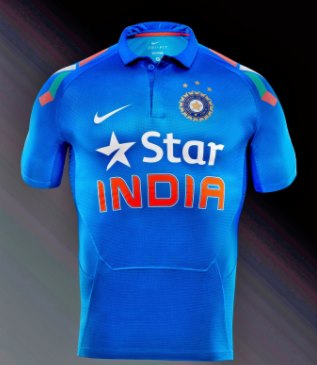