Almost a month ago, KL Rahul’s DAB celebration made the headlines which he did after taking a stunning catch in the first Test against Sri Lanka to dismiss Sri Lankan opener Upul Tharanga. Even Virat Kohli too reciprocated the celebration and their gesture went viral on the social media. It seems the Lankans gave it back in the last game of the entire series. Lankan spinner Seekkuge Prasanna did the same DAB celebration act after he dismissed KL Rahul in the only T20 game on September 6.

While chasing a huge target of 171 runs, India had lost an early wicket in the form of Rohit Sharma. Rahul and Kohli needed to make a strong partnership as the target was pretty tough. In the sixth over, when Rahul was playing at 24, tried to drive the ball, bowled by Prasanna, through the covers. He hit the ball so hard that it went up in the air. Dasun Shanaka, who was fielding at the cover, dived towards the ball and plucked it from the thin air. His marvellous catch stunned everyone watching the game while Rahul was on his way to pavilion with a sad face.

Meanwhile, Prasanna did the DAb celebration step as he knew what happened in the past and where is he standing at the present.

During the first Test played between India and Sri Lanka at Galle, Rahul took an amazing catch to dismiss Upul Tharanga. The ball hit Rahul on his chest when he jumped in the air in an attempt to evade the ball in case it was struck hard. Rahul realised that the ball was stuck between his arms and soon got hold of it in his hands before he landed on the ground. 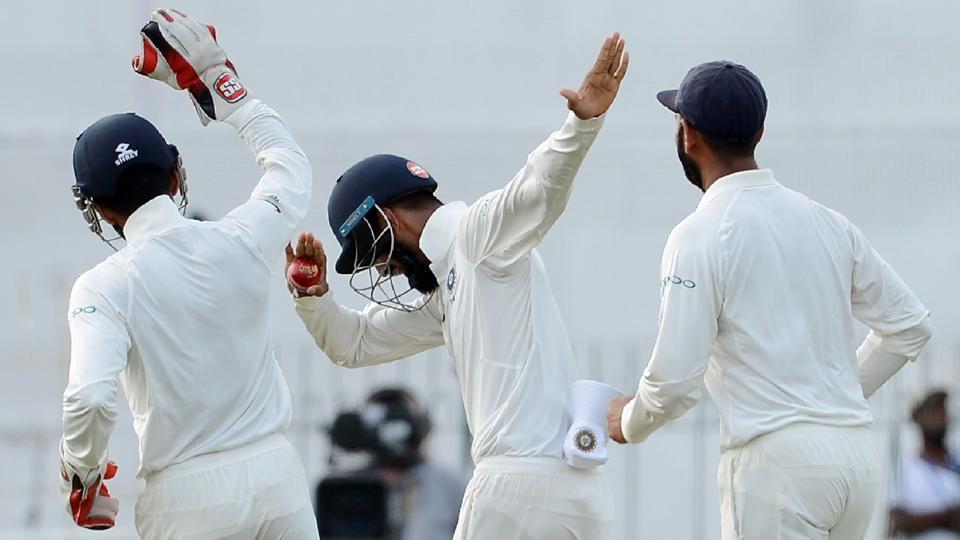 Rahul was ecstatic as soon as he took the unusual catch at short leg. He ran away from the short leg and celebrated the catch with ‘dab’ celebration.