Shikhar Dhawan was an integral part of the Indian cricket team which toured Sri Lanka. In a way, he was the success story from the tour, which he had to leave midway to be with his ailing mother. But by then, he had inflicted a lot of damage for the hosts. Virat Kohli-led team India walloped the hosts in all three formats, without putting a foot wrong. They won the series 9-0, which is a world record for a touring team on a home team.

Sri Lanka has in the process, also lost the opportunity to get a direct qualification for the 2019 cricket World Cup. But, apart from his belligerent form making the headlines, something else also went viral. We are talking about a particular picture, in which Shikhar Dhawan was spotted gifting a fan his sunglasses. The gift from Shikhar Dhawan surely made the fan’s day and quite certainly, he will treasure it for the rest of his life.

While Shikhar Dhawan put the glasses on the fan; so ecstatic and elated he was by the gesture that he could not resist hugging the Maverick southpaw. The southpaw was one of the mainstays for India in Tests with 358 runs in 3 matches at an amazing average of 89.50, apart from being the man of the series in the Tests. 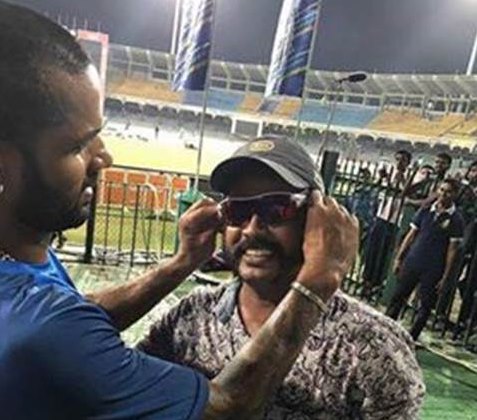 With the Indian team in good form, their next challenge will be stiffer, when they lock horns with the mighty Australians at home. But the convincing win in Sri Lanka will certainly do their confidence a world of good.

The Australia challenge starts from the 17th of September. The Australian team is currently in Bangladesh for a Test series and their batsman would by now have got a good feel of the sub continent and that makes for a riveting contest.