After Shikhar Dhawan’s son enthralled the Indian boys in Sri Lanka, it seems Mahendra Singh Dhoni’s daughter is doing the same in the ongoing Australia series. Virat Kohli was recently spotted playing with Ziva in their Ranchi residence. Australia is in India for a limited overs series. They were battered by Virat Kohli’s team India 4-1 in the recently concluded One Day International series, and have already won their 1st T20I against the same opposition in a convincing manner, India won the match by 9 wickets. Virat Kohli and Mahendra Singh Dhoni have been known to be good friends from a very early age. For example, it was MS Dhoni who made Virat Kohli’s nickname odd Cheeku known to the world. It seems MS Dhoni’s daughter to is very close to the Indian captain.

They two were seen with each other in the lawns outside MS Dhoni’s Ranchi residence. Virat Kohli was wearing his casuals and pretty Ziva donned a frock, which was brightly coloured. Virat Kohli was sipping a drink as he held onto his red mug.

Meanwhile, team India is having a great run and would dearly like to extend it and not stutter because soon they will host the Black Caps. Virat Kohli has already mentioned the importance of youngsters in the run-up to the 2019 cricket World Cup. In the post-match interview, he mentioned that he is glad to see the youngsters come up the ranks. 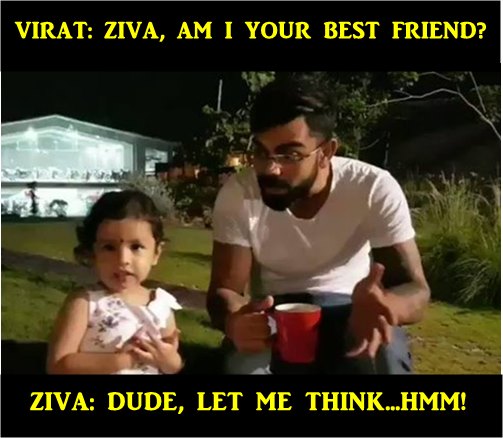 The cricketer Virat Kohli took to his Twitter handle to post this amazing video of the two. He captioned it as, ” My reunion with Ziva. What a blessing it is to be around pure innocence.’

My reunion with Ziva. What a blessing it is to be around pure innocence __ pic.twitter.com/7IpvTyynoA

For India, Hardik Pandya, Kuldeep Yadav and Yuzvendra Chahal along with Axar Patel have been the stories with the ball (If you are considering Bumrah experienced). It has been a team that has been firing in unison and for some time now.

India will host Australia for the 2nd T20I at Guwahati on the 10th of October. It will take Australia a big effort to pose a threat to an inform team India without their captain Steve Smith.