Indian skipper Virat Kohli is undoubtedly the most eligible bachelor of the country at the tender age of 29. The Indian captain is having a great run as captain after taking the mantle from Mahendra Singh Dhoni. India is currently hosting Australia at home and has already taken a handsome 2-0 lead in the series. Virat Kohli also bagged the man of the match in the second One-Day International for his serene 92 off 107 balls. With Virat Kohli having made his intentions clear, that he is eyeing and breeding a team for the 2019 cricket World Cup, youngsters like Yuzvendra Chahal, Kuldeep Yadav and Hardik Pandya are big names looking at that flagship tournament.

But it seems Virat Kohli’s stocks among the ladies has also grown. Virat Kohli is allegedly dating Bollywood starlet Anushka Sharma and the two have often been spotted together on tours. Hence we feel this piece of news may miff Anushka. Apparently, Virat Kohli posted a picture of him sleeping on Twitter. The post read, “Love doing these sleeping/waking up shots, my absolute favorite!” So apparently, he was just having some fun time to himself. In the picture, Virat is wearing his casual, shorts and a tee, the colour of which is very soothing. One can also spot sunlight leaking in, which is adding drama to the picture. No doubt it is a picture in which Virat Kohli is looking adorable.

His fans found this picture very adorable, they loved it, we presume. But there was one person who liked it more than usual. The person with the Twitter username, Engr, Sadam Khan proposed Virat Kohli and he/she proposed him for marriage. Lately, there was a Pakistani guard who too wanted to marry Virat Kohli and that picture went viral and now this, which we think is another man. 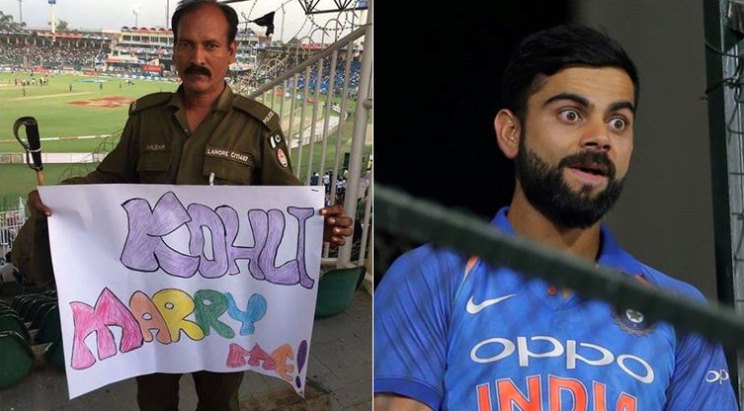 It seems the men seem to be taking a liking for the Indian cricket captain. India takes on Australia at Indore on 24th September, the home side already sits pretty after winning the first two games.