After hammering the Australian Cricket Team by 4-1 in the ODI series, Virat Kohli & Co is all set to lock horns with the guests in the T20I series starting from October 7 in Ranchi. However, ahead of the first game, rain has played the spoilsport during Team India’s practice session. The Indian cricket team arrived in Ranchi in batches after which they were scheduled to train at the JSCA International Stadium Complex on October 5 but rainshower lasting for about 45 minutes forced them to stay put at the hotel.

Meanwhile, the Indian players were spotted warming up and playing a game of football at the gallery of the JCA stadium. The pictures were shared by the BCCI on its official Twitter handle:

When rain forces you to move inside, you can still devise your own game using the space that is available #TeamIndia #INDvAUS pic.twitter.com/PIub7Hl8MC

Despite the assurance from the stadium administration, the rain may affect the match on Saturday. As predicted by accuweather.com, the temperature will be 29-degree Celsius with a cloudy sky. Hailstorm and shower are also expected in the daytime. 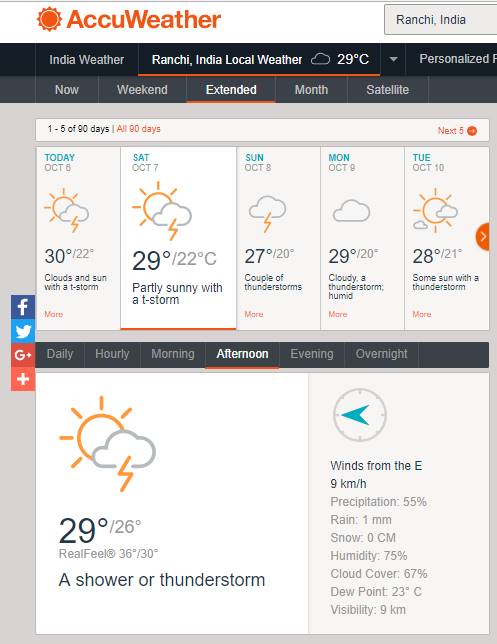 On the other hand, the Aussies trained during the afternoon without any interruption.

In the recently concluded ODI series, the first four games held in Chennai, Kolkata, Indore and Bengaluru were affected by rain. Fortunately, all the matches ended with a definitive result. Youngsters like Hardik Pandya, Kuldeep Yadav, Yuzvendra Chahal and Axar Patel emerged from the Indian squad to deserve a special mention.

Veteran Indian pacer Ashish Nehra has made a comeback in the T20 squad after 8 long months. He last played against the T20I bilateral series against England earlier in January this year. Along with Nehra, wicketkeeper-batsman Dinesh Karthik has also been picked for the squad.