Harmanpreet Kaur’s unbeaten 171 against Australia in the semi-finals of the Women’s World Cup has shot her to limelight instantly. The innings also helped India make the all-important finals, first time since 2005. Mithali Raj-led India will take on hosts England for the title. Kaur’s innings off 171* comprised of 7 sixes and 20 fours, something that is rarely heard of. But its only once she got her eye set that she took on the bowlers, she scored 103 off the last 40 balls of her innings, which is mind-boggling. After the innings, Kaur became a rage across the cricketing circles, greats of the game congratulated her and a nation of a billion wished and prayed for her.

With everything going in her favour, team India would be hoping for her to come good in the finals.

Surprisingly, it seems she has spilled the beans on the secret to her success. According to One India, Kamaldeesh, a native of Harmanpreet Kaur’s village has said, “The cricket lovers all over the world are being ecstatic after watching Harman’s stormy innings. She practiced a lot to get her timing of the shots right. She used to bat against hanging ball for hours. Even after the normal practice session at Gyan Jyoti School academy, Harmanpreet did not stop. She hit the hanging ball at least for 2,000 times to get the timing right!”

But before all that she spoke for the first time about that knock of her  to ICC and said, “Of course that was the best innings I have ever played. It was my best ODI score and I really enjoyed it.”

Untill that point in the tournament she had only 137 runs behind her name.

“I hadn’t planned for it. I had thought when I got a chance to bat that I should go with a particular approach for runs,” said Kaur, who has also played for Sydney Thunder in the 2016-17 Big Bash League in Australia.

“Whatever happened, even if we were one wicket down, or two, or three, I wouldn’t let it interrupt my batting flow, I wouldn’t get tensed, because we can bat deep, she added.

The greatest innings in ODI history?

Watch @ImHarmanpreet light up #WWC17 with a sensational 171* off just 115 balls pic.twitter.com/KNO3KQFecW

That Moment When She Reached A Ton:

Have you ever seen a century celebration like it?! It’s safe to say @ImHarmanpreet wasn’t best pleased with the running here! #WWC17 pic.twitter.com/UuYTp3g3Wm

“That was all I was thinking, that if I get a chance to hit boundaries, I would continue that,” said Kaur.

A change in batting position led to @ImHarmanpreet producing the innings of a lifetime at #WWC17https://t.co/00kLPJQSRd pic.twitter.com/3cVECjTvIK

“I was enjoying it. I like taking singles and doubles, but boundaries give me confidence. So when I got the fours and sixes, it was building my confidence and I was feeling good,” she further added. 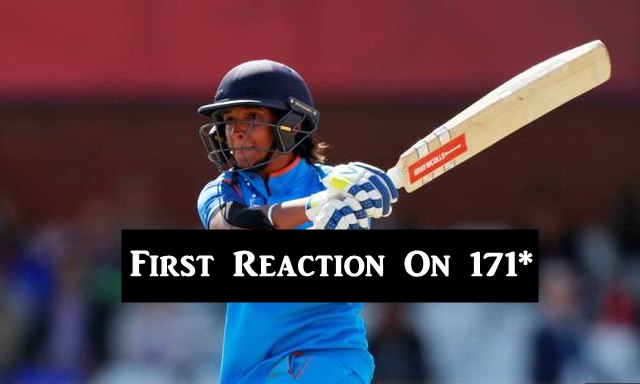