Team India’s 24-year-long wait for an all-rounder following Kapil Dev’s retirement in 1994 seems to be over now. Hardik Pandya, a passionate cricketer from Gujarat’s Vadodara, established himself as an all-rounder and time and again, he proved that Team India can rely on him as a batsman in the middle order and as a bowler to provide important breakthroughs. As a fielder, he is among the finest in the team.

Since his debut against New Zealand on October 16, 2016, at Dharamshala, Hardik has emerged as one of India’s most promising talents. As a middle-order batsman, Hardik is not just a hard-hitting batsman but he is someone who can get the team quick runs to boost the total, or get them over the line and that too by building partnerships in complicated situations.

Known for his fearless batting style and hitting the ball a fair distance, Hardik came into limelight after he played 8-ball 21 that guided Mumbai Indians to victory against Chennai Super Kings when they needed about 30 runs from the last two overs in the year 2015.

Earlier this year during the ICC Champions Trophy tournament, though Team India lost to Pakistan in the finals, Hardik Pandya won accolades from across the cricket lovers for his gutsy performance in the decider.

He came to bat when Team India’s batting line-up was reduced to 54/5. The all-rounder came with an attacking knock and he smashed the fastest-ever half-century in any ICC tournament final. Indian supporters, who had lost hope, started rooting for Pandya to pull off the impossible after he smashed the left-arm orthodox Pakistani bowler Imad Wasim for three sixes in a row. But the scenario changed quickly after he was given run-out following his mix-up with Ravindra Jadeja. He ended up with a knock of 76 runs off 43 balls. His bowling too was not bad in that match as he got wickets of rival captain Sarfraz Ahmed and Imad Wasim during his 8-over spell.

After Champions Trophy, Team India visited Sri Lanka for 3 Tests, 5 ODIs and one-off T20I. Impressed with Hardik’s previous performances in coloured jersey, Team India captain included him in the Test squad and the all-rounder grabbed the opportunity with both hands. In his debut match, he smashed a half-century in just 49 balls. During his stay at the crease, Pandya smashed 5 fours and 3 sixes.

In the third Test, Pandya smashed a 96-ball 108, his maiden international century in Test cricket, helping India post 487 in the first innings and completing a 3-0 whitewash of the hosts. Besides 150 in his debut Test series, Pandya picked up four wickets. 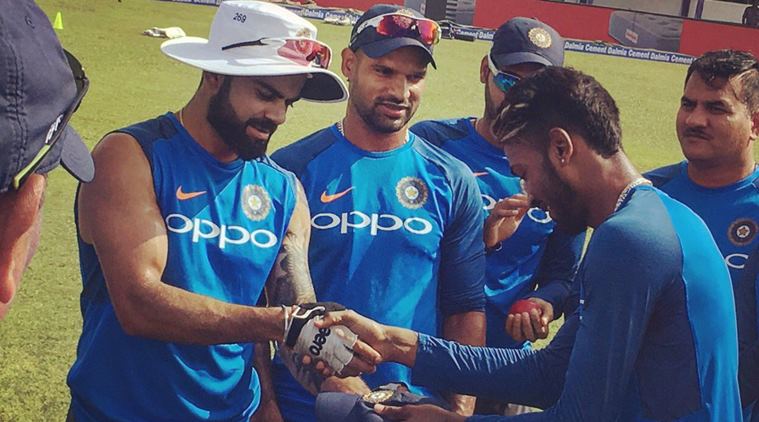 The regulars have performed, but the biggest positive would be Hardik Pandya’s inclusion and the way he shaped up in these three Test matches. The kind of confidence he showed with the ball and the maturity with the bat, it really gives us a lot of boost and the balance.

After beating Sri Lanka 5-0 in ODIs as well as in the one-off T20, Team India took on the mighty Australians. India won the ODI series 4-1. Hardik Pandya bagged a couple of Man of the Match awards and the coveted Man of the Series award for his brilliant all-round display.

The victory over the Australians also helped Team India regain the top spot in the ODI rankings, pushing South Africa to the second spot. Australia remains in third.

Hardik Pandya is the biggest asset [from the series]. Selection dilemma is always a good headache for me as a captain because its always better to have plenty to pick from and take the best 11 possible. Bhuvi (Bhuvneshwar) and (Jasprit) Bumrah have been outstanding for us. When Umesh (Yadav) and (Mohammad) Shami got their opportunity they were pretty good as well. And those two wrist spinners (Kuldeep Yadav and Yuzvendra Chahal) in the middle overs were too very good. We’ve ticked all the boxes. We have been put under pressure, and we have come back four times to win four games. Lots of positives to come out of this series.

Hardik Pandya is going to be the key player for India in the 2019 World Cup. Also, under Virat Kohli’s captaincy, Hardik Pandya is only going to flourish. Post 2019 WC, selectors can think of making him the captain with keeping an eye on the next 2023 World Cup as he has all the qualities that a leader should possess.