Kane Williamson and Hardik Pandya from India nearly met with a nasty accident on the field in the 3rd One Day International at Kanpur. The incident happened in the 28th over, when Hardik Pandya was bowling. Things could have been different had they collided flush into each other but that did not happen. The Kiwis were coasting along to their target of 338 and Kane Williamson was batting on 64 when it happened. Hardik Pandya is a huge unit but replays showed he could have been at the receiving end had Williamson stamped on his hand that was on the ground after failing to gather the ball.

Earlier in the day, Kane Williamson won the toss and opted to bowl first. India lost Shikhar Dhawan early but Rohit Sharma and Virat Kohli stitched a 200-run partnership to set up a big total for the visitors to chase in the decider. Rohit scored 147 whereas his captain scored 113. For Rohit, it was his 15th century but for Virat Kohli, it was his 32nd century. Virat also in the process became the first player to complete 2000 runs in the calendar year. He also got 6 centuries in 2017 and five against the Blackcaps.

Here are the pictures of the event: 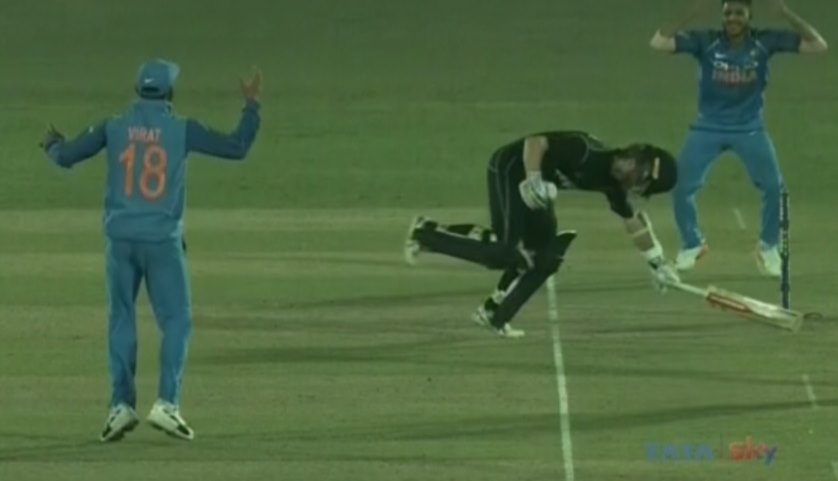 Williamson just about makes his ground in time. Kiwis are on the cusp of creating a record if they win the decider, they would win their maiden limited overs title on Indian soil. For India and Virat Kohli, it is a chance to extend their bilateral records. They have won six bilateral series on the trot, this win would make it seven.

As we speak, New Zealand has lost Kane Williamson for a well-made 64. New Zealand is 176 for three in 31 overs. They are very much in the game with a chance. It is not all over.