Harbhajan Singh has landed up in yet another controversy on Twitter after what he did on November 11. Ahead of the Indian vs Sri Lanka first Test in Kolkata, the veteran Indian spinner took a jibe on the Sri Lankan team which is struggling currently with their performance. However, a few hours later,  Harbhajan deleted that post from his Twitter account and is no more available on his timeline.

Days after Lankan opener Dimuth Karunaratne stated that thy are ready to face the challenge posed by the Indian team, Harbhajan took to his Twitter account and wrote,”Same way how they did in recent series.. they r getting beaten by Zimbabwe.. 1st inn 200 second inn 150. Sri Lankan team at their lowest so sad to see them like this.. hope they will revive and get to international level.” 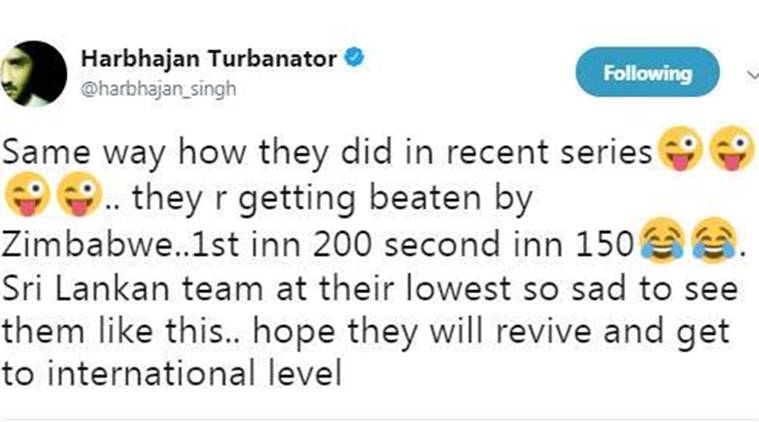 “I know Jadeja and Ashwin are both hungry for wickets. Every time they bowl it’s about sticking to the basics. If I don’t give them any chance, they will try to do something else. If we need them to change the field you have to do something extra. That’s my gameplan… I wait for the loose ones and I will stick to that. If it does not work I will think out of the box and give some extra pressure to the bowlers.”

This is not the first time that Harbhajan slammed any team or player on the micro-blogging site. During the recently concluded limited over cricket series with Australia, once he stated on Aussie skipper Steven Smith’s batting that ‘Sri Lankans playing in yellow clothing’.

The Sri Lanka cricket team have arrived India and are currently indulged in their practice session. Meanwhile, the Indian cricket board has dropped Hardik Pandya from the squad due to injury in his left arm. The first Test match is scheduled to be played in Kolkata on Novemner 16.