The controversial issue of air pollution flared up again in the third and final Test between India and Sri Lanka, with the visiting seamer Suranga Lakmal going off the ground after vomiting at the Feroz Shah Kotla stadium in New Delhi on December 5. After the visitors were bowled out for 373 in their first innings on the fourth day, they came out fielding wearing anti-pollution masks.

Lakmal had bowled only three overs when he was seen vomiting on the field, prompting the physio to run to the field. After consultation, the pacer went off the ground.

ALSO READ: Watch: How smog is killing cricket in the capital!

Earlier on December 3, the second session of the play on Sunday saw three interruptions over complaints of air pollution, prompting the Lankans to wear anti-pollution masks at the Ferozeshah Kotla ground.  The umpires discussed the issue with the players as the match was halted for around 20 minutes. 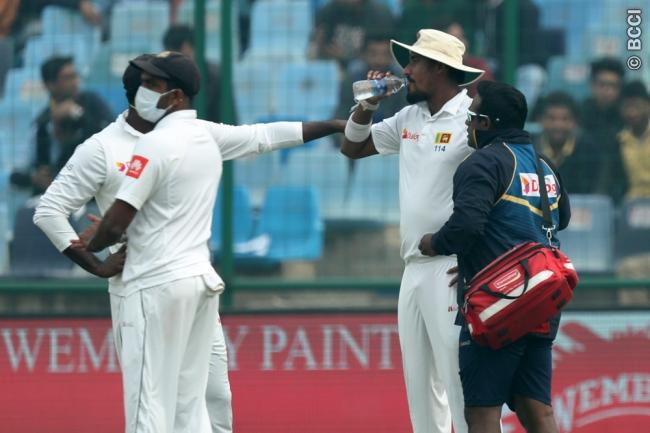 After this, the Indian crowd felt that the visitors were intent on wasting time and breaking the rhythm and focus of the hosts. The visiting batsmen were greeted with chants of “losers”, “losers”.

Sri Lanka coach Nic Pothas said that three cricketers, Lakmal, Lahiru Gamage and Dhananjay de Silva had trouble breathing and vomited. But Indian bowling coach Bharat Arun differed and said the visitors were making too much of the issue instead of focusing on the game.

India bowling coach Arun reacted by saying: “Kohli (who scored 243 runs) batted for almost two days and he didn’t need a mask. The conditions are same for both the teams.”

Following the incident, here’s how people react on Twitter

Sri Lanka fast bowler Suranga Lakmal goes off the field after vomiting on the ground due to Delhi smog and pollution. Is Indian capital city fit for sports/people? @ICC #INDvSL #SriLanka #LKA #delhipollution

Sri Lanka paceman Suranga Lakmal vomitted on the field before walking off as Delhi’s notorious smog , and they blamed us for lack of sportsmanship. #INDvSL

Meanwhile, Sri Lanka were bowled out for 373, falling 163 runs short of India’s first innings total on the fourth day