Indian Premier League chairman Rajiv Shukla made a mistake on social media by congratulating the Indian women’s cricket team for making the finals of the Champions Trophy, instead of Women’s World Cup. Twitterattis were quick to spot this and they started trolling him instantly. Just to correct Rajiv Shukla’s memory, it was the men’s cricket team led by Virat Kohli, who played the ICC Champions Trophy event. This is a major goof up coming from a person from the top brass level of Indian cricket. “Congratulations to @BCCIWomen team for making it into the Champions trophy Final by beating Australia. Great knock by @ImHarmanpreet,” he had tweeted.

Thankfully, he tagged the right team or else he could have been subject to more trolls.

Meanwhile, the final of the Women’s World Cup is slated for 23rd July at the iconic Lord’s. Before the start of the finals Mithali Raj spoke to the media and said, “I am sure Harman would be fit and wanting to play the finals. All of us are very excited to be in the finals at Lord’s. It is a once in a lifetime opportunity. (On her mid-innings dug out dance) Veda and I choreographed a song and I just reminded Veda about that when it was played out. I did not know the cameras were on us.” 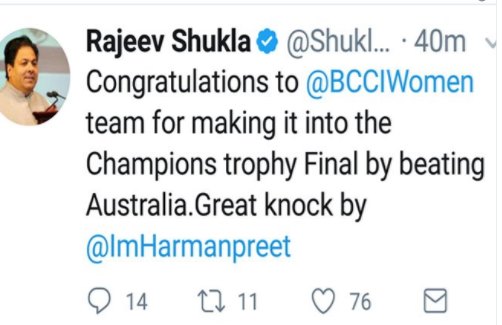 So the man at the helm doesn’t even know if its the WWC or the Champions Trophy. Disgrace and Shame on his part @ShuklaRajiv

Now that’s enough to know about state of women’s cricket in India!

It’s sad ! When people associated with cricket don’t know that it is #WWC17 not champions trophy!!