Riding on Fakhar Zaman’s brilliant batting, Pakistan posted a challenging 338/4 against India in the Champions Trophy final at The Oval in London on Sunday. Apart from Fakhar Zaman (114), Azhar Ali (59), Mohammad Hafeez (57 not out) and Babar Azam (46) also contributed handsomely to the Pakistan’s cause. For India, pacers Bhuvneshwar Kumar, Hardik Pandya and spinner Kedar Jadhav took one wicket each. Led by Virat Kohli, India will be playing their fourth Champions Trophy final while Pakistan, having already lost to India in the league matches, their first-ever tournament decider. Earlier, India won the toss and they asked Pakistan to bat first.

India may be ahead against Pakistan in ICC tournaments by an 8-2 margin, but in all ODI tournament finals Pakistan holds a 6-2 edge in the head-to-head battle against India. 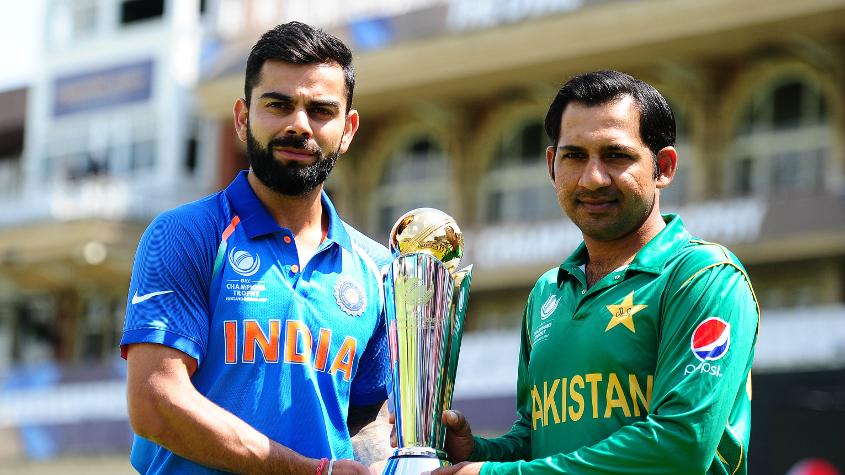 Where to watch the live telecast of Pakistan vs India match?

__ The reigning champions are in the house! #PAKvIND #CT17 pic.twitter.com/kfGjcTbmeK

Where to watch live streaming of Pakistan vs India game?

The live streaming of Pakistan vs India fixture is available on Hotstar.

__ Pakistan have arrived at the The Oval for the #CT17 final! #PAKvIND pic.twitter.com/HYfpWrNa29

India: Virat Kohli-led side have looked a balanced side with both their batting and bowling departments having managed to click throughout the tournament. Their defeat against Sri Lankans was an eye opener for them.

Pakistan: Sarfaraz Ahmed-led side have managed to bounce back in this tournament, defeating South Africa and Sri Lanka in the group stages and England in the semi-finals to book a berth in the final.

The changing rooms are looking in great condition ahead of the #CT17 Final! #PAKvIND pic.twitter.com/vN2rWGdQQh

India: With the presence of players like Shikhar Dhawan, Rohit Sharma, Virat Kohli, Yuvraj Singh and Mahendra Singh Dhoni, Indian side look capable enough of chasing any target. With the likes of pacers Bhuvneshwar Kumar, Jasprit Bumrah, spinners Ravindra Jadeja and Ravichandran Ashwin, Indian have a solid bowling line-up too.

What advice did @SDhawan25 have for @Jaspritbumrah93 ahead of his first ICC tournament final? #PAKvIND #CT17 pic.twitter.com/QxGwcIyMXu

Ahead of the #CT17 Final, @realshoaibmalik asks @RealHa55an about his performances, his celebrations, and whether he’s feeling the pressure! pic.twitter.com/4y7z9MDpZz