Well, it seems you were caught napping when this incident took place. Very few actually spotted it, not a fault for sure. India defeated Bangladesh comprehensively to book themselves a spot in the finals. India beat them by 9 wickets and they will start the finals as the more fancied team when they lock-horns against arch-rivals Pakistan. Pakistan, thanks to their bowling, they have made the finals of this event for the very first time.

But the event we are focusing on is when India gifted Bangladesh 5 penalty runs in the 40th over. Did anyone spot it? Very few must have! India were disciplined in their bowling and fielding and hence this is that off moment that everyone has. But did you see Virat Kohli’s reaction, who was fuming at his former boss Mahendra Singh Dhoni.

So, here is exactly what happened?

It was a Yuvraj singh throw from short fine leg we assume, he throws the ball and it is away from the stumps. The ball was gathered by Mahendra Singh Dhoni far away from the stumps. Knowing MS Dhoni and his cheeky reflexes and street-smartedness, he tried to flick the ball towards the stumps. But, he had forgotten the fact that he was without his gloves and his gloves were kept near the stumps. While he flicked the ball, it went and hit his gloves. The umpires spotted that, which is commendable on his part and straight-away awarded 5 penalty runs to Bangladesh.

That act may not have hurt India much but that really got Virat Kohli fuming. He could not believe what had just happened and he was shouting. We had not seen Virat Kohli so animated the the recent past, just shows how much every run means to him. That is the right spirit to approach the game. 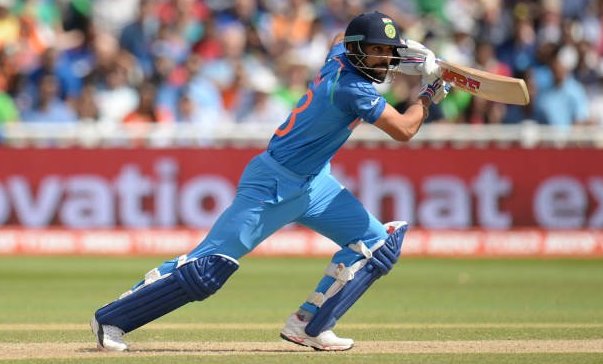 India will now play Pakistan in the finals on Sunday and that promises to be a mouth-watering clash.