Ashoke Dinda has been a victim of trolls, especially during Indian Premier League (IPL) 2019. There is even a page dedicated to trolling him on Facebook named “Dinda Academy of Pace Bowling”. Every time a bowler gets hit for too many runs in an IPL match,  trolls start comparing them with Dinda, who they believe was a fast bowler with a poor economy rate.

Some of the bowlers who have often found themselves in the list are Umesh Yadav, Mohammed Siraj, Jaydev Unadkat, Varun Aaron, Dhawal Kulkarni, Shardul Thakur and others.

Of late, social media handles of IPL teams tend to pick up trends and use them in their posts to engage more fans. Royal Challengers Bangalore (RCB) did that when Umesh was called a student of the so called Dinda Academy by the trolls, but it backfired. In order to answer Umesh’s trolls they took it too far and eventually had to delete their tweet. Here’s a screenshot: 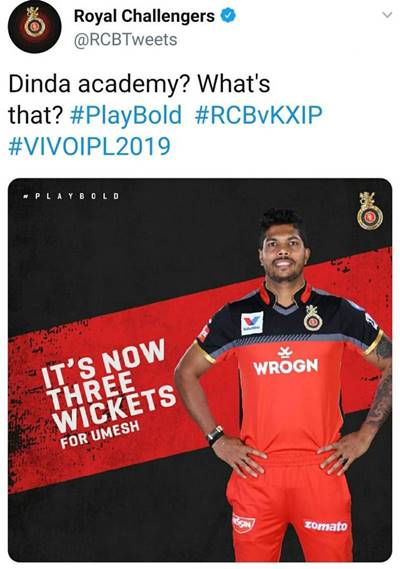 Dinda didn’t seem to get offended with random people trolling him. But a tweet from the franchise he played for rubbed him the wrong way and triggered a response backed by his career statistics.

Here’s how the Bengal fast bowler silenced his trolls:

As some of you pointed out, the previous version of this tweet was in bad taste.

However, for all of you who have relentlessly trolled this lad, he said #challengeAccepted and bowled his heart out! 4-0-36-3, 15 off his last two overs & 2 wickets in those! #PlayBold #RCBvKXIP pic.twitter.com/sLDnLRtlcf

The 35-year-old’s IPL statistics are quite impressive. He played for five IPL franchises including Delhi Daredevils, Kolkata Knight Riders (KKR), Pune Warriors (PW), Rising Pune Supergiants (RPS) and RCB. He played 78 matches and took 68 wickets at an economy rate of 8.20 which is not that bad considering he bowled in powerplays and death overs.

Not just IPL, he has been the highest wickettaker for Bengal in Ranji Trophy for 8 years. He has 417 First-Class wickets in his bag. Also, RCB trolled him after Umesh took 3 wickets for 36 runs in 4 overs. Dinda had the same bowling figures for India in his last T20I against Pakistan in a T20I played in 2012. He has not been picked by any franchise since 2018.

Dinda’s story of becoming an international player is an inspiring one. Maybe his trolls will refrain from being harsh on him if they knew his story.

“I know I am not the best bowler in the world but the world doesn’t have any idea what I have been through to become a cricketer. My family never supported me in my cricket career, it was 9 years of hard work to be able to play for Bengal in Ranji Trophy. I used to sleep in the cricket ground only on some days without even eating food. If you don’t want to support me please don’t but don’t degrade my game because I know how much I’ve worked day and night to be able to play cricket.” via Cricipedia

ALSO READ: IPL Or Gully Cricket? Ball Goes Missing Only To Be Found In Umpire’s Pocket