Ashish Nehra is all set to play the last international match of his career at his home ground when India will take on New Zealand in the first T20I of the bilateral series on November 1. For the last 20 years, he has served the Indian cricket team with his cricketing skills and was a part of several glorious moments including the 2011 World Cup victory. Despite undergoing 12 surgeries in his entire career, he has always pushed himself to give his best while playing cricket at any level. Currently, the most experienced cricketer of team India will once again entertain in his last match at the Feroz Shah Kotla Stadium.

Ahead of the first India vs New Zealand T20I match, Indian skipper Virat Kohli, former Indian skipper Mahendra Singh Dhoni presented a memento to Nehra while the entire Indian squad cheered for the legendary bowler. The moment was captured in camera and was shared in the official Twitter handle of the BCCI.

VIDEO: Ashish Nehra given a memento by the team for his remarkable contribution to Indian cricket #TeamIndiahttps://t.co/3itQO1Ov5u pic.twitter.com/orHnyu3eUB

Here are some more glimpses: 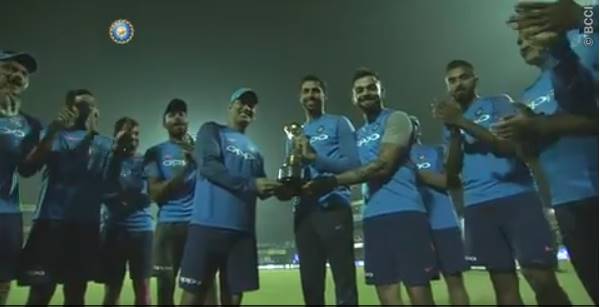 Ashish Nehra given a memento by the team for his remarkable contribution to Indian cricket/ Photo: Twitter 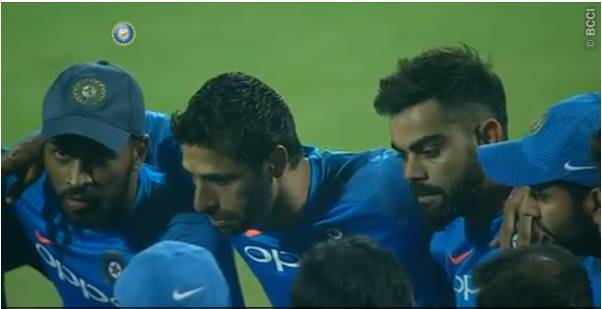 Ashish Nehra in the team huddle for the last time/ Photo: Twitter

Earlier, Indian players Rohit Sharma, Dinesh Karthik, Bhuvneshwar Kumar, Ajinkya Rahane and Shikhar Dhawan share their fond memories of playing with ‘Nehraji’. In a video that was posted by BCCI, all the players spoke their heart out. At the end of the video, all the players wished Ashish Nehra good luck for life after retirement.