Actor-producer Arbaaz Khan has admitted to his involvement in an alleged IPL betting racket.

The 50-year-old spilled the beans after he was called to record his statement before the anti-extortion cell of Thane police, according to The Times of India.

At the police station, Khan was made to sit face-to-face with Sonu Jalan, the alleged kingpin of IPL betting racket, arrested earlier in the case. Arbaaz Khan, told the police that he has been placing bets for the last six years, cops said.

Khan allegedly lost Rs. 2.80 crore to a bookie, Sonu Jalan, in bets on IPL matches and was not paying the amount, following which the bookie had threatened the actor

Khan was summoned after his name cropped up during a probe involving Jalan, who is said to have run a gambling operation in the country as well as abroad and reportedly has connections with fugitive don Dawood Ibrahim.

How did Arbaaz Khan get into this mess?

The AEC busted the racket on May 15 with the arrest of four people in Mumbai, including Sonu Jalan alias Sonu Malad, who is believed to be one of the top bookies of the country, officials have said.

During the investigation, a “connection” between Jalan and Mr. Khan was established, said Pradeep Sharma, Senior Inspector and head of the AEC, on Friday.

“We suspect that Arbaaz Khan had placed bets on IPL matches and want to scrutinise his bank transactions,” another police official had told PTI. 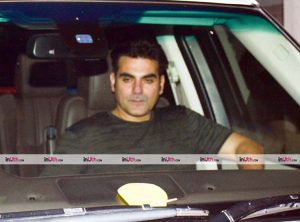 “We have found photos and chats that show Jalan and Khan (Arbaaz) were in touch,” said Sharma.

The two are said to have known each other for over five years. Khan allegedly lost ₹2.80 crore in betting to Jalan and was not paying the amount, following which the bookie had threatened the actor, the official had said, citing the interrogation of the arrested accused.

Other Big Names in Jalan’s diary

Jalan, in his police statement, has mentioned several prominent names who bet huge amounts on certain IPL teams and players. Police are in possession of a diary that has names of several prominent people. The names of a Bollywood celebrity, contractors and builders figured in the diary, police said.

“Jalan had arranged a match-fixing meeting at Dubai. The celebrity was also present at that time. We are probing to know which match was fixed and who all were involved ,” Sharma said.

Who is Sonu Jalan?

Jalan’s racket has a turnover of Rs 5000 crore, according to Economic Times. He was the kingpin of the 2013 IPL betting racket in which former cricketer S Sreesanth emerged as the top accused. Jalan has links in Pakistan, Gulf and several European countries.