Virat Kohli and Anushka Sharma tying the knot far away from India in November 2017 created enough buzz on the social media. And now, it’s their post-marriage PDA for each other which is giving relationship goals to their fans. In the second Test match at the Centurion, Kohli scored the 21st century of his Test career and as soon as he reached that feat, he kissed his wedding ring. Days after when he scored another ODI ton, Anushka put Virat’s picture on her Instagram story with all her love and affection.

On February 1, India faced the Proteas in the 1st ODI match at Durban. They were required to chase a tough looking target of 270 runs. But the way Virat and Ajinkya Rahane batted, they snatched the victory from the mouth of the Proteas. It was his first ODI century in Durban and 33rd in ODI career. 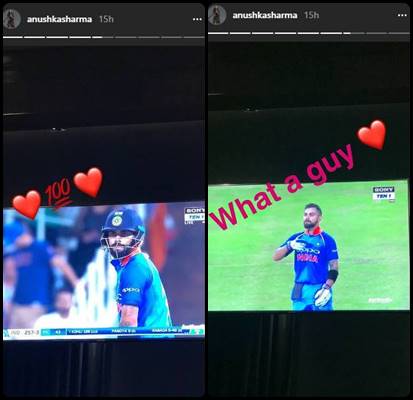 Earlier, Kohli has dedicated many of his achievements to his wife. While they were dating, Kohli, on several occasions, used to send a flying kiss to Anushka, who used be in the stands, after scoring a century.

However, this was for the first time that Anushka applauded for Virat’s achievement on the social media. She was also spotted at the Newlands, Cape Town during the first India vs South Africa test match.